Jorge Lorenzo has little doubt his former team Yamaha will return to the forefront of MotoGP because of the championship's "cyclical" nature.

Lorenzo won three premier-class titles for Yamaha before leaving the manufacturer to join Ducati at the end of 2016.

His replacement Maverick Vinales had gotten off to a storming start, winning two races on the trot, but his and Yamaha's form has tailed off dramatically since – and the last race at Aragon cemented the manufacturer's current winless streak as its worst ever in the premier class.

Lorenzo has backed his former employer to recover from the slump, likening it to the droughts occasionally suffered by Spanish association football giants Barcelona and Real Madrid.

“I think MotoGP is a little bit like soccer in the way that it's like a cyclical thing,” he said.

“Barcelona, Real Madrid can have three or four difficult years, and sooner or later they come back.

“Yamaha have the history to come back, and I think sooner or later they will arrive.”

Yamaha rider Valentino Rossi said at Aragon that the last time Yamaha made a significant improvement to the YZR-M1 bike was during 2015 – a season the Iwata firm dominated, with Lorenzo snatching the riders' title from Rossi.

Asked whether he saw signs of Yamaha's upcoming decline the year after, in which Lorenzo and Rossi were beaten by Honda's Marc Marquez, Lorenzo said: “2016 was a difficult year, because we started strong with the electronics, then Honda improved a little bit and they catch us.

“But as I said before, it's a cyclical thing and they [Yamaha] will come back sooner or later.”

Yamaha's current riders do not expect a turnaround in the team's fortunes this year, with Rossi admitting it would need a “miracle” to win a race and Vinales saying he had “zero motivation” and “zero expectations” for the rest of 2018.

Rossi has also already expressed worries over the 2019 bike, while Vinales insisted he did not dare to look that far ahead.

“I don’t want to think about next year. Otherwise I will be bad, I will make 15th [place],” he said at Aragon.

“I need to concentrate on this year. I do my best to trust the bike, trust we can do another step.

“And I need to be ready that when the bike works better, I can be better. That’s it. I don’t want to think about next year already.” 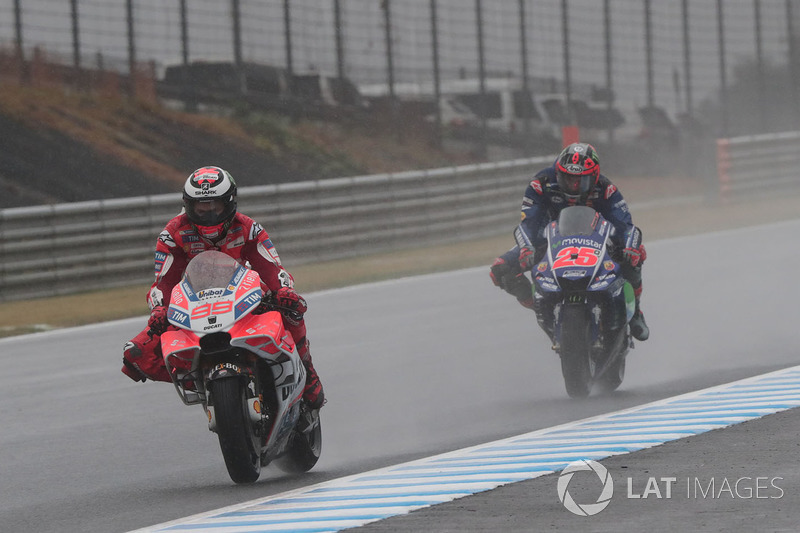