Yamaha Racing has slow start to season finale in Valencia

The last race of the 2012 MotoGP season was yet another frustrating weekend opener for the MotoGP riders with mixed conditions making any valuable set up improvements impossible. A wet morning session allowed the riders to get a feel for the new tarmac surface of the circuit however with a half wet and half dry track in the afternoon there was little reason for them to venture out. 2012 World Champion Jorge Lorenzo wrapped up the morning wet session in third position and didn’t venture out onto the track in the afternoon. 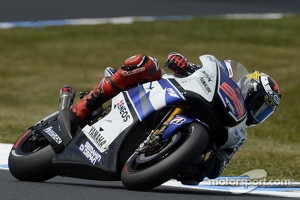 Katsuyuki Nakasuga, standing in for the weekend in place of injured rider Ben Spies, took a tumble on the final corner in the morning’s rain soaked practice but was unhurt and able to continue. The 2012 All Japan Superbike Champion ventured out for just two laps in the afternoon session, choosing to sit out the remainder of the session along with Lorenzo.

Katsuyuki Nakasuga Position 14th - Time 1.45.180 - Laps 19 “Today the sessions were very strange with mixed weather. I had a small fall this morning and I’m very sorry for the extra work for my team to fix it. I was a little nervous but am much more relaxed now and hope to keep this mood for the weekend. Last year I finished sixth here in the race and I hope to improve on my performance this this Sunday.”

Jorge Lorenzo Position 18th - Time 1.45.945 - Laps 14 “Like a lot of times this year we’ve had quite an easy Friday with not so much training. In the morning we made a few laps but in the afternoon it was mixed so we decided not to take any risks. There is a new surface on the track and we need some time to test it, especially in the dry.”

Wilco Zeelenberg - Yamaha Factory Racing Team Manager “Again another tough Friday with not many laps done. This morning was quite wet and the feeling was not that bad in the conditions, not perfect yet but we’re happy with the grip so far. It’s pretty constant everywhere, which is a big improvement compared to the older surface. Let’s see how the grip is going to be in the dry as we haven’t been able to test it yet.”

“It’s been another useless Friday, we didn’t test anything really so we hope the weather forecast will be better over the next two days. We will see what happens tomorrow. Nakasuga-san had a crash on the last corner but was not hurt so he will be back and fighting tomorrow.”