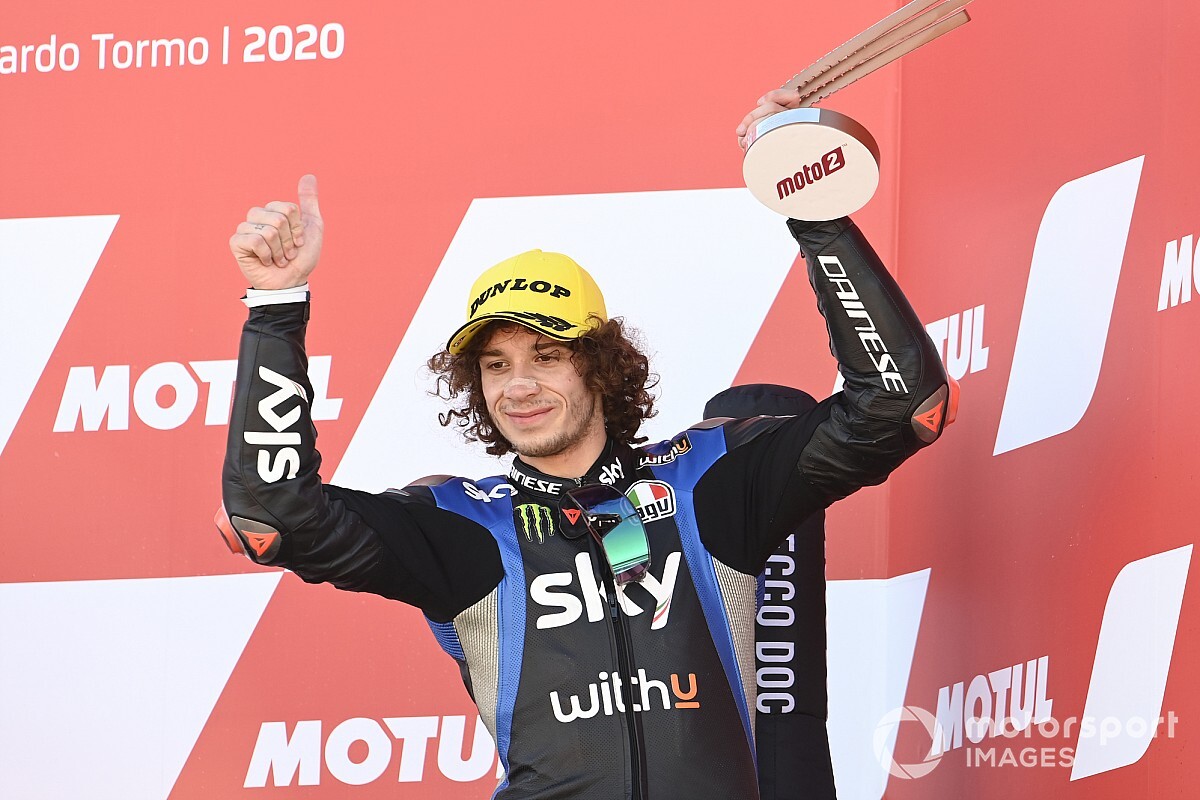 Marco Bezzecchi was courted by Aprilia to join its MotoGP team for 2021 as replacement for Andrea Iannone, but the VR46 team didn’t give him the nod to step up.

Aprilia has been left with limited options to replace Iannone for the 2021 season, after the Italian was handed a four-year doping ban earlier this month.

The Italian marque had been linked to the likes of outgoing Ducati rider Andrea Dovizioso and LCR’s Cal Crutchlow.

But the former didn’t feel the project was right for him at this point in his career, while Crutchlow opted to become Yamaha’s test rider having been unwilling to wait for the verdict on Iannone’s doping case having held discussions with Aprilia since March.

VR46 team boss Pablo Nieto confirmed to DAZN Aprilia did offer Bezzecchi a deal for 2021, but the VR46 team preferred the Italian to stay put in Moto2.

"The future of Bezzecchi is to stay here, in 2021 he will race with us," Nieto said on DAZN.

"They have tried, we understand that for Aprilia signing him was one of their priorities and they wanted Marco to be there.

“They have seen that he is one of the riders who is in the best shape in the category and they needed a rider like him.

"For us, Marco is the spearhead of the [Moto2] project for next year and I even think he wants to stay in Moto2 to fight for the championship next year.”

On Thursday, Aprilia CEO Massimo Rivola said its current test rider Bradley Smith was a “valid option” for 2021, despite the marque removing him from the race seat in favour of Lorenzo Savadori for the final three rounds of the season.

Other Moto2 riders including Fabio Di Giannantonio and Aron Canet have been linked to the second Aprilia seat, though it appears American Joe Roberts is amongst the favourites now.

Earlier on Saturday, Rivola confirmed to the MotoGP world feed Roberts was an option despite the American already having a Moto2 contract with Italtrans for next year.

It is thought a decision on Aprilia’s new rider will be taken before the final race weekend of 2020 is out, with a view to sticking the new signing on the bike at a private Jerez test next week.