Maverick Vinales says the brake failure which forced him to jump off his Yamaha at 130mph in the Styrian Grand Prix was something he "never had during my MotoGP career".

Vinales was passed by Ducati's Andrea Dovizioso in the early stages of the Styrian GP, before dropping to 10th by lap 10 as he began to lose brake pressure.

The problem seemed to resolve itself, before it got worse again, with the Yamaha rider raising his hand to signal he had an issue on lap 13.

Then on lap 17 on the way into Turn 1, his front brake "exploded" and he had to jump off, with the bike slamming into the barrier and bringing out the red flag.

The restarted race was eventually won by Tech 3 KTM rider Miguel Oliveira after a final corner move on Jack Miller and Pol Espargaro.

Explaining his crash, Vinales said: "I was quite fast, I was feeling fantastic on the first laps, I was pushing Dovi, but as we don't have top speed, you can see I could not overtake.

"I overtook one time and I said 'okay, now I can go forward in front', but then he overtake me on the straight very easily.

"I was just waiting to get the rhythm, but then I started to lose the front pressure of the brake, I went out [of the track] one time.

"I make three laps very slow in 1m26s, then I push again at 1m24s, then again without brakes, and then Quartararo, Valentino [Rossi] and [Danilo] Petrucci overtake me.

"Then suddenly the brake was good. So, I could make 1m22s, 1m24s on mediums and I was recovering a lot to Valentino and Fabio, but then suddenly at corner one the brake exploded, so [it was] impossible to do anything."

When asked if he'd had any issues with his brakes before, he added: "No, no, it's something I never had during all my MotoGP career.

"Maybe [the brake pressure would] go down a little bit.

"I played with the lever [to adjust it], but on every lap I was adjusting the lever corner by corner so I couldn't do nothing."

Though Red Bull Ring is notorious for its hard braking zones, Vinales doesn't feel this was the main cause of his failure. 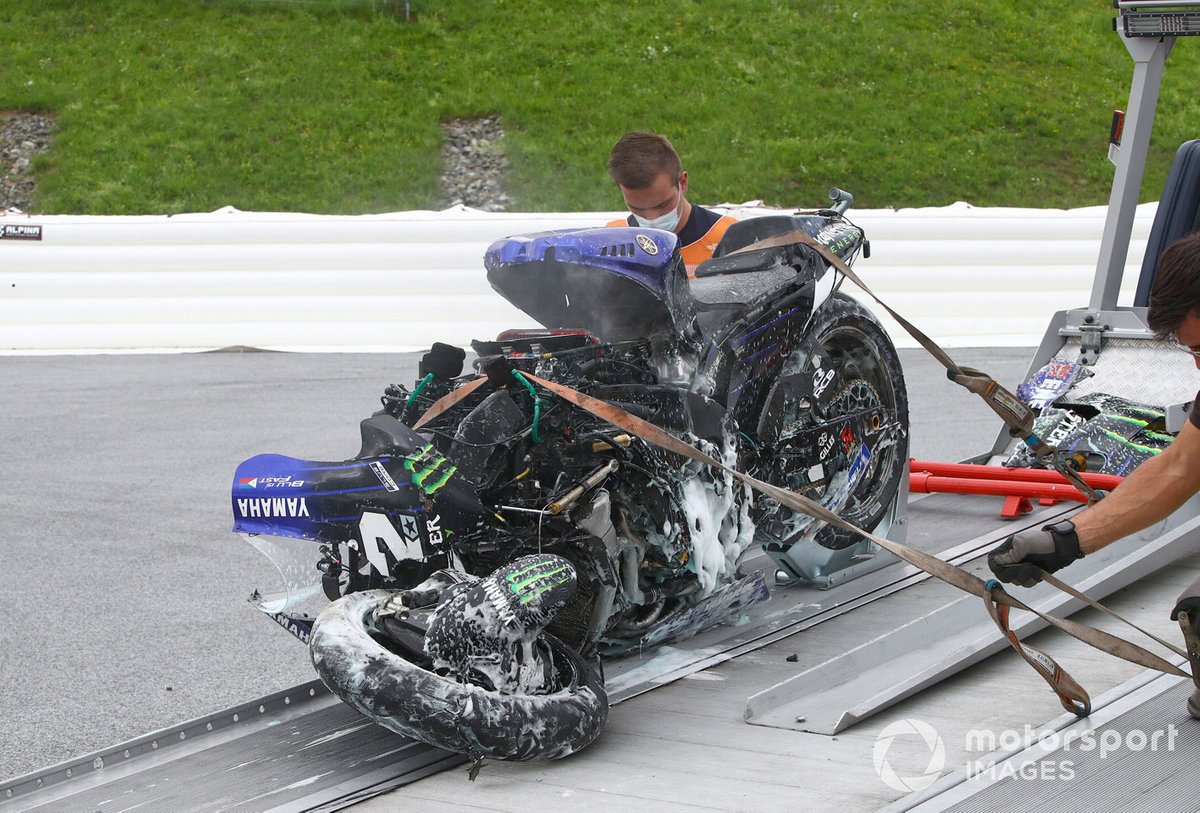 Bike of Maverick Vinales, Yamaha Factory Racing after his crash