Vinales keeps "wondering" what he'd do with Honda/Ducati 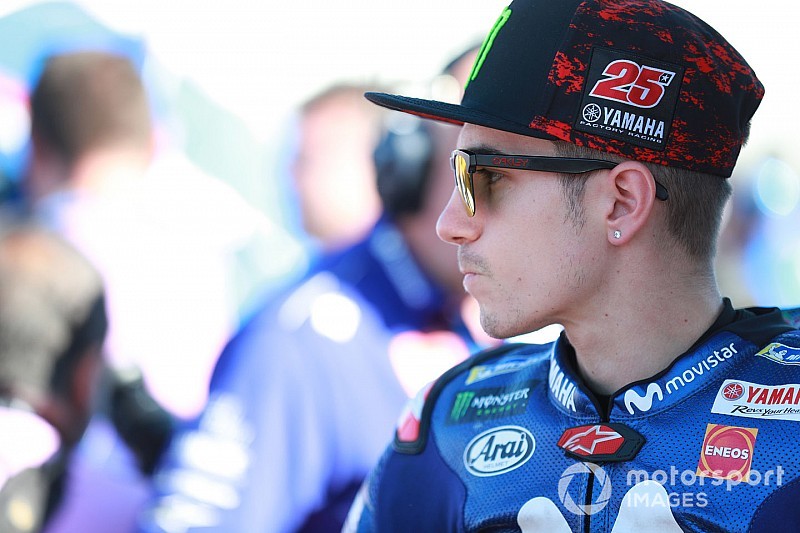 Maverick Vinales says that he keeps wondering what he could do on a Honda or a Ducati amid Yamaha's ongoing issues in MotoGP.

Yamaha's latest upturn in Thailand, where Vinales scored his first podium since the summer break, turned out to be a one-off as the team struggled for form again at Motegi.

After finishing down in seventh in Japan, Vinales is 141 points behind champion Marc Marquez in the standings, and only seven ahead of Honda satellite rider Cal Crutchlow.

When asked if he ever wondered where he would be as a Honda or a Ducati rider, Vinales admitted that the thought has often crossed his mind this year.

"Every day I think about it, what I would do with those bikes, what results I would achieve," said Vinales, who renewed his contract with Yamaha before the start of the 2018 season.

"But it doesn't help me in the situation I'm in, I have a two-year contract. Every day [I think about it], but what's the point?

"Now I'm here and I have to work with this, there are no excuses, I have to work and create a very good bike for next year from the first time I ride in the Valencia test.

"The bike worked before and it has to work again. I wish I knew how to make a bike."

Vinales said he demanded an explanation from Yamaha in a technical meeting after last weekend's Japanese GP, but the team failed to convince him.

"It wasn't a longer meeting than usual, but I'd like to know why I'm slow. I want them to explain it to me and until they do, I don't get out of my chair," he recalled.

"The explanations didn't convince me, they wanted to leave, but I didn't want to leave without an explanation.

"I don't know if Yamaha is working or not, if I knew I would have said it already because I'm not hiding. The only thing I want to know is why I couldn't go fast in Japan."

Vinales added that he will not change his riding style and it is the team who should make a bike suited to him instead.

"I'm not going to force my riding style, last year I did it and I was worse," he said. "Let them make a bike for me and they can be ahead winning races.

"I'm not going to change my riding because I lose my essence, which has brought me here. I can never lose that."