Vinales: "The first five or six races will decide my Suzuki future" 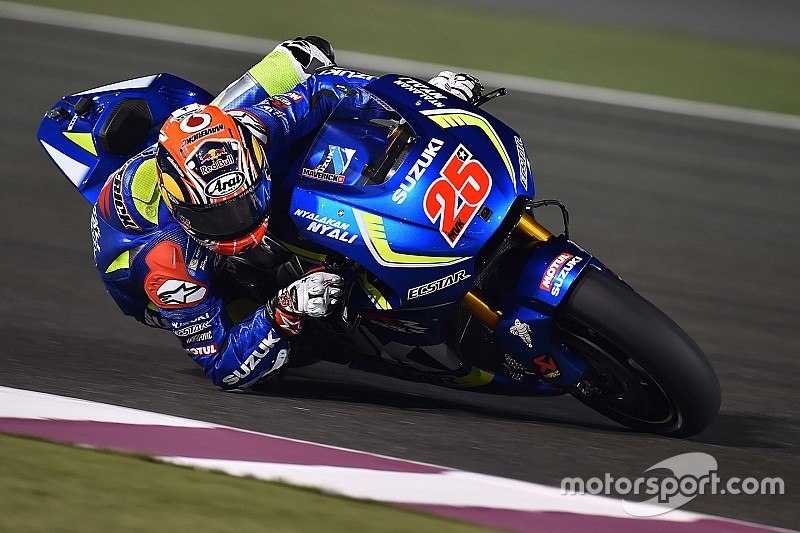 Suzuki rider Maverick Vinales has established himself as one of the rising stars of the MotoGP paddock. He spoke to Oriol Puigdemont about his progress in the sport so far and what the future could hold for the Spaniard.

The 2016 one has been the pre-season of Maverick Vinales, the youngest rider in MotoGP and, probably, the most valued diamond in the rough.

In this chat with Motorsport.com in the Suzuki offices in the Losail paddock, Vinales shows an unusual calmness for a 21-year-old who was the rookie of the year in 2015, and who this winter has left many people speechless.

What's the reason this pre-season has gone so well?

"It's true it's gone well, improving all the time, and the balance has been very good. In Malaysia it was complicated basically because of the electronics - Suzuki had not done any laps with it.

"At Phillip Island we finished first and here, third. I'm much more motivated than last year."

Suzuka has made two chassis available, the 2015 one and the new one. Why did you choose the former while your teammate chose the new one?

"I feel more comfortable with the 2015 one. The difference is that with that one I can take the lines that I want, and even if I overshoot a corner I can correct it. That's very important, especially in the races."

Is there a chance you will race with the new one on some circuits?

"Yeah, definitely, we are not ruling it out at all. Maybe in Qatar the new one will not work well, but then in Austin or Le Mans we'll bring it back because it will adapt better to those layouts."

After your first season, which Maverick are people going to see?

"I have a lot more experience. I know the circuits and the bike, and I know the type of riding this category requires.

"Consistency will be important, and to finish in the top six. I think that with the new engine and the seamless gearbox we can take a significant step forward."

How did you feel about the new gearbox?

"There's really a difference, but we have to fine-tune it more, so we'll see if it's available for the first grand prix."

And what do you expect at a personal level?

"I need to use all that experience to improve my weak points. That's what I focused on this winter, in trying to find what I was missing, both physically and mentally, and also on the bike.

"This year I have to be much more aggressive, especially on the opening laps. In any case I don't think it will be a problem if I start near the front because I'm a race rider. That's where I excel, like it happened in Moto2."

Are you going through the best moment of your career?

"I feel better prepared each day. Although it sounds obvious, it helps that the bike is working well. Then everything is easier.

"That's why we need to try to get things working in places like Malaysia the same way they work in Australia. Maybe instead of being first or second, being fifth or sixth."

If you had to draw a line showing your progression during your career, where would you put yourself now?

"I still have a lot to learn. For example, I haven't had a race where I'm at the front. You learn more in one race there than in years lost in the midfield.

"It's a different story, the level is much higher, the mistakes are most costly and the pressure is multiplied. The important thing is to keep progressing."

Is Suzuki using your data to help your teammate?

"To be honest, we haven't spoken about it, but I think it's not smart to hide information from your teammate. I take things from Aleix and he takes them from me.

"If a circuit has 12 or 16 corners, there will be at least a few where he's better than me and vice versa. So you look at it and you try to benefit from it."

Where do you see yourself in two or three seasons?

"I see myself fighting for the title, either with Suzuki or with someone else. That's been my goal since I jumped to MotoGP."

Do you think Suzuki can give you what you need to achieve that goal?

"Both Suzuki and I knew that when we met the project was very young. My future will be decided in these five or six first races.

"If I really see that I have the level to fight in front but the bike is not letting me, then I'll think which way to go.

"The intelligent thing right now is to forget about that and focus on the first races and approach them as if they were the last."

What did they tell you when you signed with Suzuki?

"I was told the target was to end up fighting for the title, otherwise I wouldn't have jumped to MotoGP."

When you watch the races on TV, do you see yourself far from what Lorenzo, Rossi or Marquez do?

"If I were in that situation, I think I could keep up with them. It happened in Moto2: from having finished fourth in Qatar, I went on to lead a race and I knew how to do it.

"I have been doing it since I'm a little kid, so I don't think it took me by surprise. But having a long, close fight would be a bit harder for me."

Do you try to copy something from them?

"Of course, the braking, and trying to copy a different line thorough some corners. I look at what they do better and I try to improve.

"What impresses me the most is how long they have been on the bike. Last year was a bit complicated for me because I was used to winning. Seeing yourself in 10th or 11th is not easy and you lose motivation.

"But then you analyse it and you realise that Rossi has been around for a very long time, and Jorge and Dani too. Even for Marc, this will be his fourth season.

"And the bike has a lot to do with it. When it does what you want everything aligns and you can give 100 percent.

How did the switch to Michelin affect you?

"The truth is that I feel very comfortable with the soft tyre and I can do what I like on the bike. With the hard one I crashed at Phillip Island, but it's true that I was pushing hard.

"The feeling I have with Michelin is good, they make me feel very confident. At the end of the day, if you push really hard is because you feel safe."

Rossi says relationship with Marquez “can never be recovered”