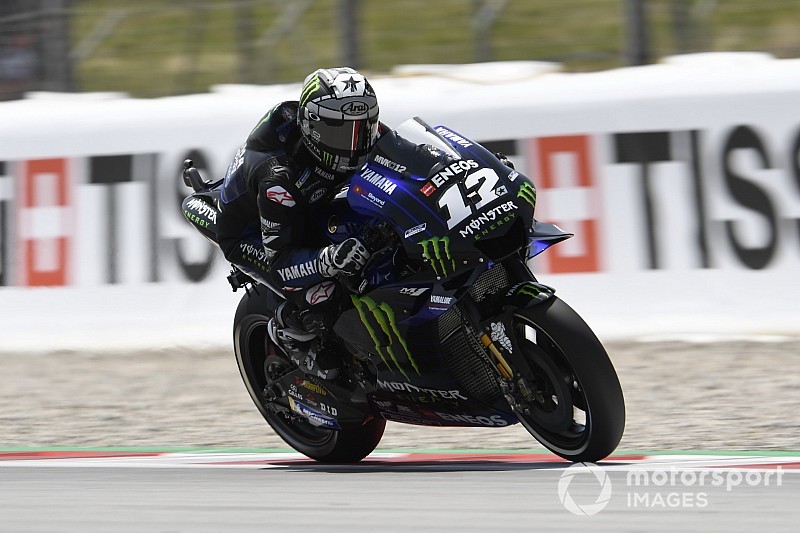 Maverick Vinales has been penalised for impeding fellow Yamaha MotoGP rider Fabio Quartararo in qualifying for the Catalan Grand Prix.

Factory rider Vinales was due to start the race from the front row, having qualified in third place – the best result he'd managed since the second round of the 2019 season in Argentina.

However, Vinales was found guilty of "riding in an irresponsible manner", appearing to impede Fabio Quartararo in the dying seconds of Q2 - which cost the Petronas Yamaha rider a chance to post an improvement after the chequered flag.

This did not prevent Quartararo from taking pole, as his earlier lap was good enough to see off nearest rival Marc Marquez by 0.015s, with Marquez having had a major moment at Turn 4 on his final attempt.

Before the announcement of what would end up a three-place grid penalty, Vinales had said in the official press conference: “I don't know what to say, I thought I get the chequered flag so I was saying hey to the people, make wheelies and everything and I didn't understand.

“Then I saw Fabio and I saw it too late. I don't know. I didn't expect it because I thought I was on chequered flag, I didn't check the screens, was like this.

“If I see the laptimes, they were not fast. They were not coming in his best lap. For sure I made the mistake that is true, I thought I get chequered flag but many riders did the mistake in other tracks so if they penalise me, they should penalise also the other riders.

“Normally I am not the one that follow [others during qualifying], normally I always push. I did a mistake, that is true.”

Vinales, who also apologised to Quartararo on social media, was summoned to race direction after the press conference, and the verdict was firmed up shortly thereafter.

The penalty drops Vinales to sixth on the grid, as he joins factory Yamaha teammate Valentino Rossi and Ducati's Andrea Dovizioso on the second row.

Petronas Yamaha rider Franco Morbidelli has been promoted to the final spot on the first row.

Lorenzo: "Most consistent" weekend down to Honda tweaks