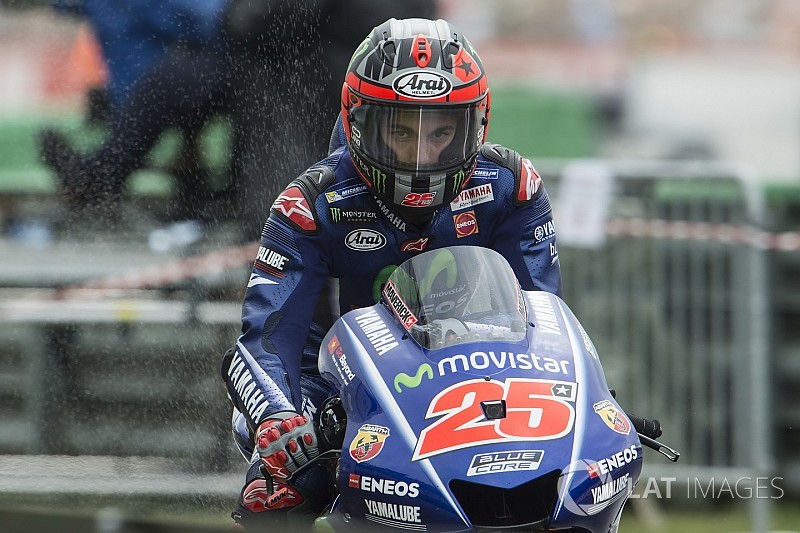 Maverick Vinales has admitted the new chassis Yamaha brought for him to use at Assen does not suit his riding style as well as the one he used at the start of the MotoGP season.

After dominating pre-season testing, Vinales won the first two rounds of the season to take an early lead in the championship, but has since suffered fluctuating form, including crashes in Austin and Assen.

The latter accident came when he was trying to make up for lost ground after qualifying 11th, and cost him his lead in the standings – meaning he now trails Ducati’s Andrea Dovizioso by four points.

Vinales had been using one of the new frames Yamaha first brought for he and teammate Valentino Rossi to try in post-race testing at Barcelona, but explained at the Sachsenring on Thursday that it doesn’t allow him to ride as aggressively as he is used to.

“The new bike we bring in Assen has a lot of potential, but maybe isn’t the best for my riding style because I’m used to being really aggressive,” Vinales said when asked about the new chassis.

“The chassis I rode in the first part of the season gave me a little bit more confidence to be aggressive on the bike, especially on changing direction it was really stable, and then quickly on the gas, that’s what I feel more comfortable [with].

“Anyway on the new bike we have many areas where we can improve, so we have to make the correct choice [of which chassis to use].”

Vinales described his Assen crash, which occurred at the final chicane, as the “strangest of my life” post-race, but said after analysing it he realised he had simply tried to change direction too quickly and while using too much throttle.

“I was aggressive because I wanted to close fast the gap, because the laps were coming [down] really fast, and I put too much gas,” Vinales admitted.

“I had first the wheelie, then I changed quickly the direction, the bike didn’t have the correct balance to change direction. It has never happened to me to crash at the chicane, especially on the exit.

“But it’s something that can happen we learn, and we learned in the rain, for me it was most the important thing.”

Rossi to stick with new frame

Rossi confirmed he would continue to try both types of chassis this weekend at the Sachsenring, but again intends to use the new variant – which he won with at Assen – for the race.

“For me the situation is like Assen,” Rossi confirmed. “It’s like this [only having one of each chassis] because we don’t have time, maybe the situation will change for Brno [after the summer break].

“I will stay with the new one [for the race] because I feel good. But we always try to use the other one to have a reference and be ready in these conditions.”

Miller: Losing factory Honda contract would be "no big deal"