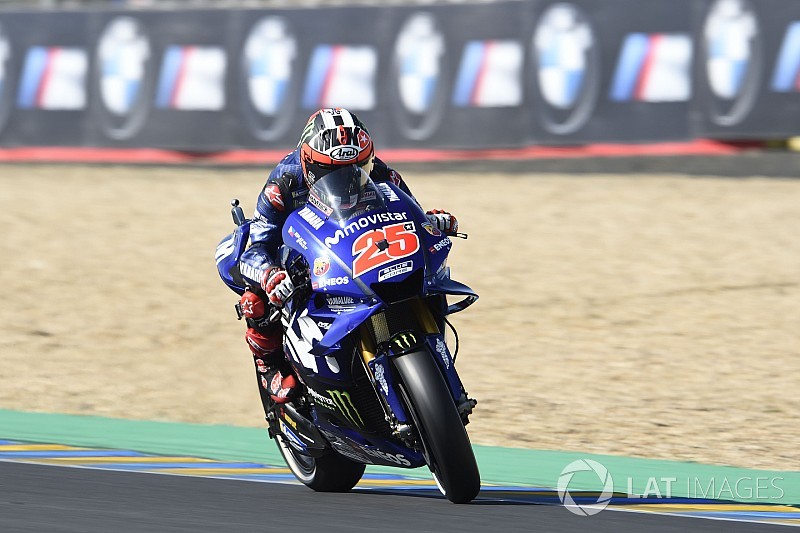 The Spaniard was fastest of all in the relatively cool conditions of FP3 on Saturday morning, topping a race weekend session for the first time since last September’s Aragon race.

However, the works Yamaha squad’s familiar rear traction struggles re-emerged in the second phase of qualifying, as track temperatures doubled from 22 degrees to 44 degrees between FP3 and Q2.

Vinales said the heat meant he went from having a bike good enough for pole to one that was “impossible” to contend with, as he ended up eighth-fastest, six tenths slower than poleman Johann Zarco on the two-year-old Tech 3 Yamaha.

“In the morning I felt really good, good pace with old tyres,” recalled Vinales. “With used tyres I could keep [1m]32s-low.

“[Using a] new tyre I went 31s-mid, so I was pretty happy and confident that in qualifying I could do a 31s-low.

“If my bike was like the morning, I could have fought for pole. But in the afternoon it was impossible to fight for pole.

“I wish the race was at nine o’clock. It’s gonna be hot tomorrow and tomorrow I’m going to push 110 percent and then see where I am.”

Vinales also described his session-topping FP3 performance as being like “candy”.

“I feel fast again, and that’s good,” he added. “I know the level I have, I know when the bike I am there. For that I am happy, I still have confidence in myself.”

Works teammate Valentino Rossi was ninth in qualifying, but said mistakes on his hot lap did not make a dramatic difference to his grid position.

For sure I expected a little bit more from qualifying, because yesterday and also this morning I was quite strong,” he said.

“But in the lap with the softer tyre I didn't ride the maximum, I did some small mistakes - so I can do better.