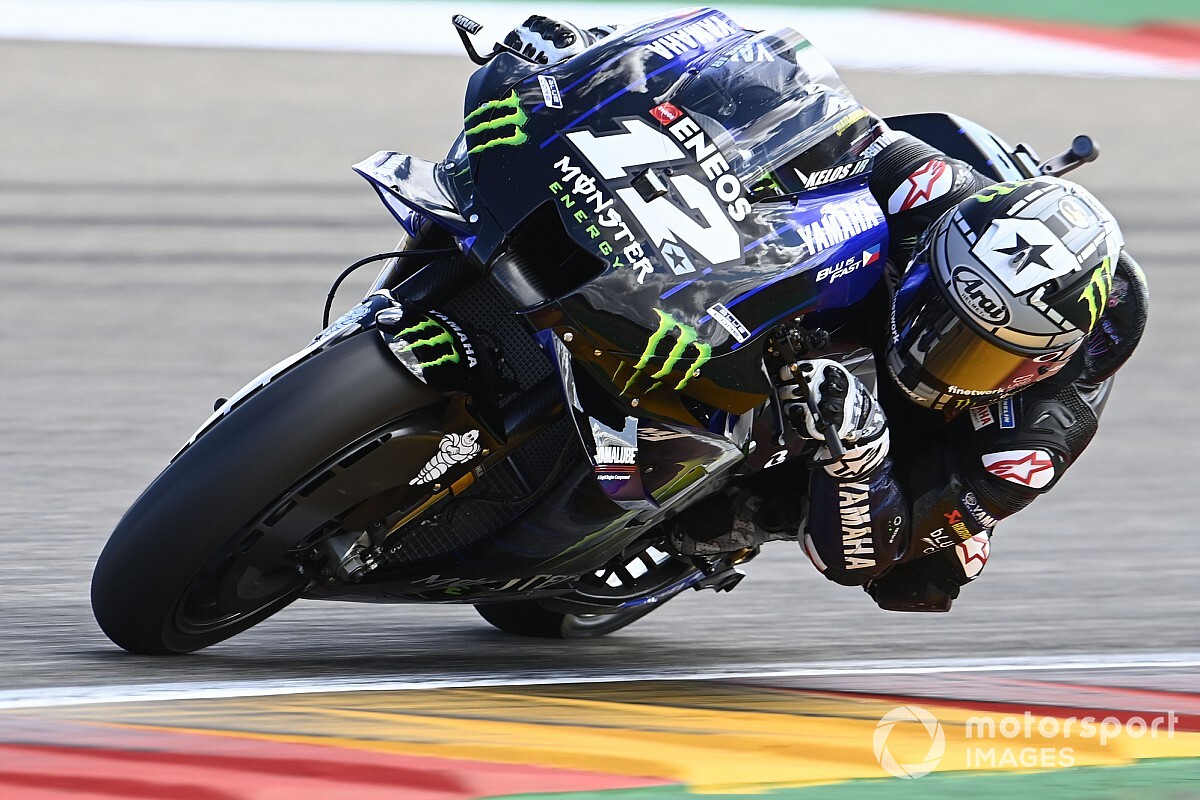 Maverick Vinales says it’s “impossible” to close down the points gap to MotoGP championship leader Joan Mir with the current Yamaha after struggling to seventh in the Teruel Grand Prix.

Vinales showed strong pace throughout practice at both Aragon rounds, but suffered in both races with a drop in grip, with the Spaniard only seventh having started fourth on Sunday.

Franco Morbidelli on the 2019 Yamaha dominated the race, while the Suzuki duo of Alex Rins and Joan Mir romped to another double podium.

Mir’s third place means his championship lead extends to 14 points, with his gap to Vinales now 19 with just three races to go.

Vinales insists Yamaha hasn’t improved anything with the 2020 bike since the Malaysia test in February, and admits he can only “pray” to have a “perfect bike” at Valencia if he is to still contend for the championship.

“It’s impossible with the bike we have right now,” he said when asked what he has to do to close down Mir.

“Suzuki right now are in another level. So, we cannot do nothing. We just need to pray to have a perfect bike in Valencia, perfect start, be first and to see if we don’t lose the position.

“I will try to be fresh, try to give good feedback to the guys in the box so they can provide us with the best bike.

“We don’t have the correct arsenal to fight against Suzuki, because looks like they are able to turn faster, more corner speed and less metres [wide] in the corner.

“So, you cannot recover all this by only opening the gas. We have ideas, but for sure it will be very tough to improve the bike because we didn’t improve nothing from the Malaysia test.

When asked where the 2019 bike of Morbidelli’s is better, Vinales says it’s “basically the DNA of Yamaha – turning and corner speed”.

Explaining what went wrong in the race, Vinales says he had “no grip” from the third lap on his soft rear tyre and “a lot of chatter” on the front end.

“We had no grip on the tyres during all this race, I had a lot of chatter on the bike,” he added.

“It was very complicated, but anyway the objective has been done. I took out one point from Fabio [Quartararo, who was eighth], this was our objective to be the first 2020 Yamaha.

“It’s what we can do. So, now the guys need to analyse for Valencia, to get the data and to be better, to be faster. That’s it.

“I tried today to do my job, I think today could have gone much worse because the chatter I had was very difficult to manage and to stay on the bike.

“I’m not happy, but satisfied I finished in front of Fabio.”