Vinales "didn't care" if he crashed at Le Mans 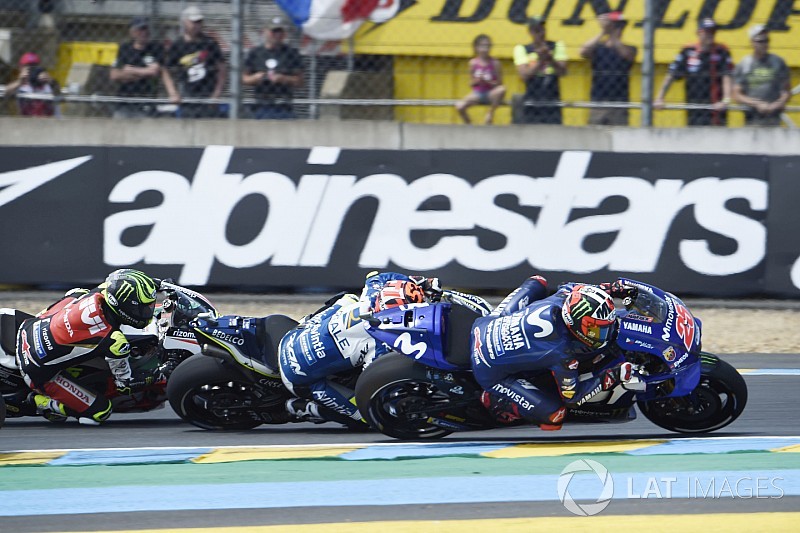 Maverick Vinales says he started to risk crashing "in every corner" during MotoGP's French Grand Prix as he was frustrated at being so far down the order.

Starting the Le Mans race from eighth, Vinales was running as low as 13th in the early laps, and only broke into the top 10 on Lap 11, helped by the crashes of Andrea Dovizioso and Johann Zarco.

Vinales said the first part of the race was "horrible", and he only managed to improve late in the race, eventually taking seventh, because "I didn't care if I crashed or not".

"I didn't care if I crashed or not, I was trying my best.

"The first part of the race was horrible, I don't understand why. I could not accelerate and many riders overtake me especially on the beginning of acceleration."

Finishing 18 seconds behind Rossi, Vinales admitted the Italian's side of the garage "worked much better" over the weekend.

"I think they work much better over the weekend," said the Spaniard, who is second in the standings, 36 points behind Marc Marquez, despite only having one podium finish in five races.

"Also on that we can improve to work better and make a better bike for the race. We are not working well inside the box, we will surely have to change things. It seems that I am the only one who suffers [at Yamaha].

"I'm a little sick of being behind but I decided to be here, so I can't complain. The working method maybe has to change, because it is clear that something does not work."