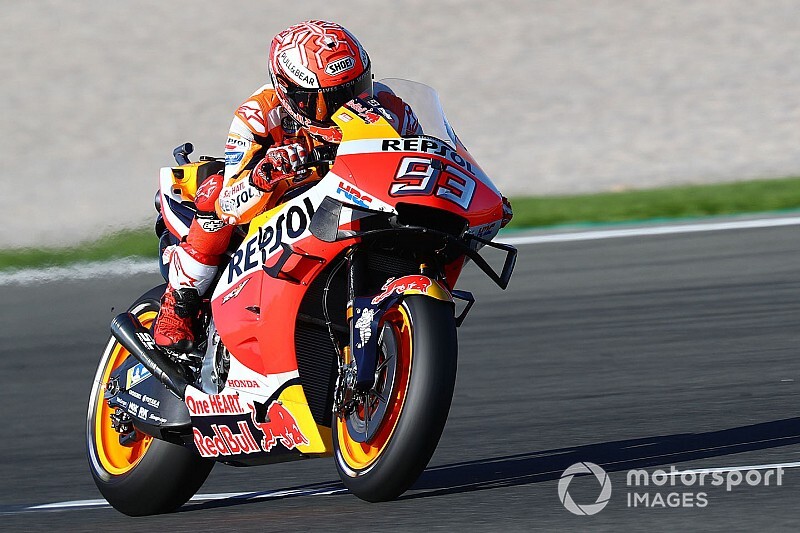 Marc Marquez brushed off a crash at Turn 14 to top the MotoGP warm-up session ahead of this afternoon’s Valencia Grand Prix season finale.

The 20-minute session was delayed by half an hour due to concerns over low track temperatures for the earlier Moto2 and Moto3 sessions in their original time slots.

With 10 minutes of the session gone, Marquez fell from his Honda as he headed into the Turn 14 left, while Suzuki’s Rins had taken over at the head of the field with a 1m31.702s.

Rins improved to a 1m31.622s, which stood as the benchmark until the closing moments, when Yamaha’s Vinales fired in a 1m31.569s to edge 0.015 seconds clear of the field.

Marquez had quickly returned to the action on his second bike following his crash, and was up to second almost instantly.

A final effort of 1m31.295s from Vinales put him 0.289s out of reach and looked to cement him top spot in the session.

But Marquez dug deep on his last lap and produced a 1m31.136s to lead the final warm-up of the season ahead of Vinales.

Doubt has surrounded Petrucci’s Ducati career following this round, with rumours suggesting he could be ousted from the marque altogether to make way for Miller, while Johann Zarco could step into Pramac.

This only seemed to spur Petrucci on, though, as he ended the morning third fastest from Petronas poleman Quartararo and the latter's teammate Franco Morbidelli.

Andrea Dovizioso was sixth on the third of the four GP19s present this weekend, with Rins, Suzuki teammate Joan Mir, Miller and Pol Espargaro (KTM) completing the top 10.

Valentino Rossi was only 11th in the order having run as high as second at one stage, with the Yamaha rider beating Andrea Iannone (Aprilia), Zarco (LCR), Aleix Espargaro (Aprilia) and LCR’s Cal Crutchlow.

Honda’s Jorge Lorenzo was 19th ahead of his final appearance as a MotoGP rider this afternoon.