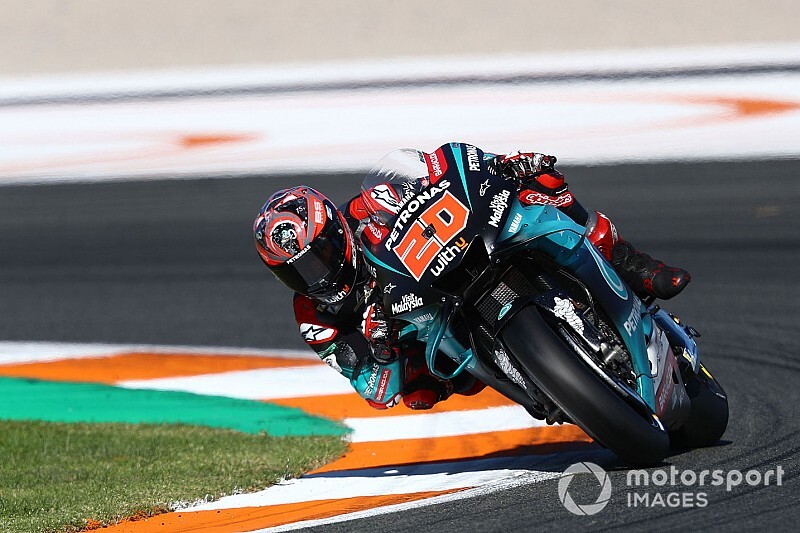 Fabio Quartararo topped the first day MotoGP testing in Valencia despite a crash, while new Honda line-up Marc and Alex Marquez wrecked their bikes in falls during the session.

Quartararo set a 1m30.163s late in the afternoon before bringing the session to a halt with a  fall at Turn 10, but held onto top spot despite a challenge from Yamaha stablemate Maverick Vinales in the closing stages.

After an hour of the session, just four riders had completed a lap, with KTM’s Pol Espargaro guiding this year’s RC16 to a 1m31.447s ahead of Tech3 counterpart Iker Lecuona.

Honda rookie Alex Marquez – whose one-year deal to join the works team was confirmed on Monday – ventured out on track on Cal Crutchlow’s ’19-spec bike not long afterwards for his first laps on a MotoGP bike since the ’14 Valencia test.

Just 20 minutes into his first run, Marquez crashed at the Turn 10 left-hander and badly damaged the bike.

With nine minutes remaining of the second hour, the red flag briefly brought the session to a halt, as Aprilia test rider Bradley Smith crashed at Turn 10.

HRC test rider Stefan Bradl – who was first out on track on Tuesday morning – demolished the ’20 prototype he was riding at the same corner some 40 minutes later.

Honda’s day would get worse, as Marc Marquez wrecked his only ’20 Honda in a crash at Turn 13 around an hour later on an out-lap – which caused another red flag and left him to complete the day on this year’s bike.

When the session got back underway, Petronas SRT’s Quartararo took over top spot with a 1m30.599s as he – as well as team-mate Franco Morbidelli – put miles on his current bike, albeit with slightly different aerodynamic packages.

Vinales deposed Quartararo at mid-afternoon with a 1m30.593s on the ’20 M1, which featured a new chassis and engine.

With 90 minutes left, Quartararo re-assumed top spot with a 1m30.163s, but would crash at Turn 10 moments later and bring out a third red flag.

Vinales cut his advantage down to 0.164s late on, but Quartararo would remain top, while Morbidelli completed an all-Yamaha top three on Tuesday.

Andrea Dovizioso was top Ducati in fourth, having spent the day evaluating a new chassis amongst other ’20 parts.

Teammate Danilo Petrucci only completed 10 laps due to an ongoing shoulder injury and was 12th, while Jack Miller was 10th on a bike largely similar to the one he rode all season.

Marc Marquez was fifth in the end, with Suzuki duo Joan Mir and Alex Rins falling in behind – both testing a new chassis and the new engine which test rider Sylvain Guintoli first tried in Japan last month.

KTM’s Espargaro was eighth, as he switched his focus to the ’20 RC16, which sported a radically redesigned steel chassis. He finished ahead of Valentino Rossi on the second works Yamaha.

Lecuona was top rookie in 13th, with works KTM counterpart Brad Binder 21st and Alex Marquez 23rd after Honda managed to repair his bike from his earlier crash.