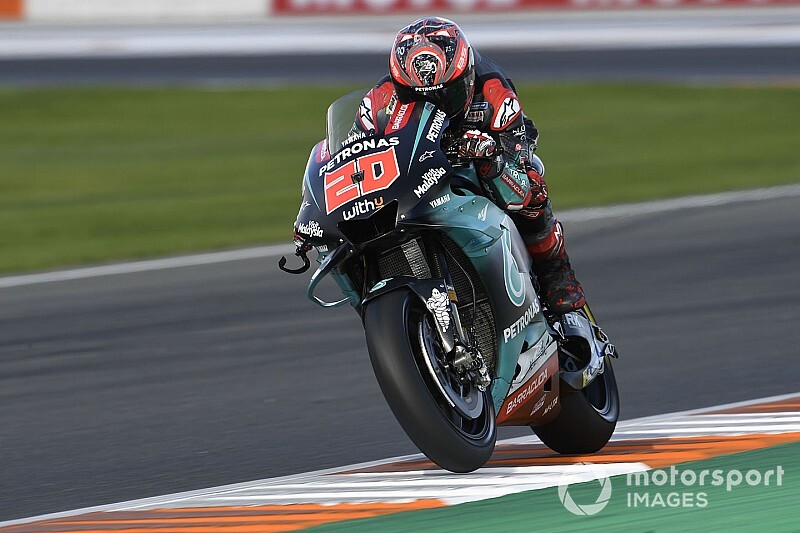 Fabio Quartararo did not relent his stranglehold of the MotoGP Valencia Grand Prix practice timesheets, after topping FP3 by 0.224 seconds from Marc Marquez.

Friday pacesetter Fabio Quartararo led the way in FP3 early on, and took over late on with a 1m30.232s to head into this afternoon’s qualifying as the rider to beat.

Marquez edged clear of the field with a 1m31.631s five minutes in, which he duly improved by six tenths before becoming the first rider to improve on combined times with a 1m30.898s – a laptime just 0.163s outside of Quartararo’s Friday best.

This moved the Honda rider half a second clear of the field in FP3 - though kept him third overall - and would remain the benchmark in the session until the closing stages.

Petronas Yamaha of Franco Morbidelli challenged Marquez’s time as the session entered its final eight minutes, though missed out by 0.086s.

Four minutes later, works Yamaha runner Maverick Vinales deposed Marquez with a 1m30.766s, before teammate Valentino Rossi took over at the top of the combined times with a 1m30.630s.

Pramac’s Jack Miller, who led early on, returned to the top of the standings shortly after Rossi set his pacesetting lap with a 1m30.543s, though Petronas’ Quartararo was starting light up the timing screens.

Quartararo produced a 1m30.232s, which would not be bettered as the chequered flag brought the session to an end, with Marquez leaping up to second with a final effort of 1m30.456s.

Miller held onto third ahead of Rossi and Morbidelli, while Vinales found himself shuffled back to sixth after the final salvo of laps.

Factory Ducati duo Danilo Petrucci and Andrea Dovizioso slotted in behind the Yamaha rider, with Joan Mir the only Suzuki directly into Q2 at present after teammate Alex Rins missed out in 12th.

LCR Honda’s Cal Crutchlow secured the last direct Q2 placement despite suffering a crash at the Turn 10 right-hander midway through the session.

Aprilia’s Aleix Espargaro – who was 18th – crashed twice in FP3, while Pramac’s Francesco Bagnaia was sent over the handlebars of his GP18 while exiting pitlane late on in a bizarre incident.

KTM’s Pol Espargaro was denied direct passage to Q2 by just 0.043s in the end, having sat second in the session at one point in the closing stages.

Tech3 KTM rookie Iker Lecuona had an impressive second morning as a MotoGP rider, as he managed to find a further eight tenths on his Friday best and ended up ahead of works KTM rider Mika Kallio, Bagnaia and Tech3 teammate Hadizh Syahrin in 20th.

Marquez "proud" Alex is on Honda's list to replace Lorenzo