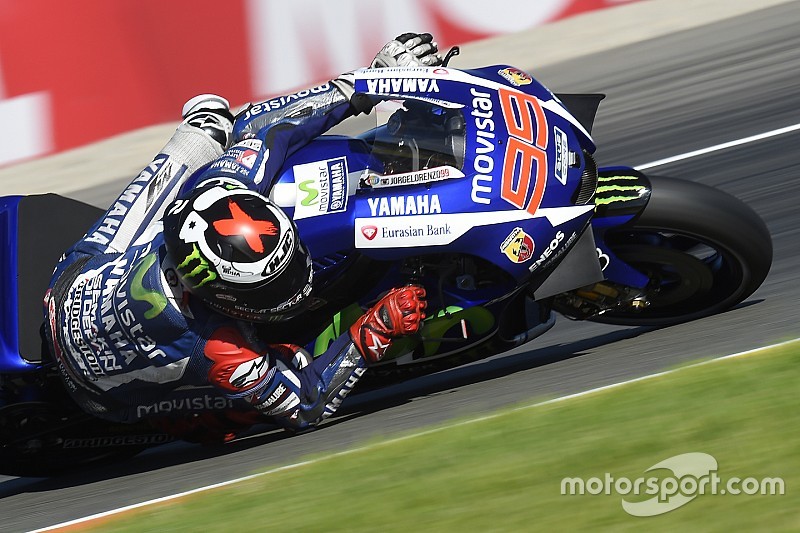 Jorge Lorenzo was crowned MotoGP champion following a lights-to-flag victory in the title-deciding Valencia Grand Prix, as Valentino Rossi charged to fourth from the back of the grid.

Lorenzo led every lap of the race, but was under huge pressure from the Repsol Hondas of Marc Marquez and Dani Pedrosa in the closing stages – and couldn’t afford both of them to pass him as it would have handed the title to Rossi.

From the back of the grid, following his penalty for his clash with Marquez in Malaysia, Rossi tore through the field from 25th to fourth. But his efforts weren’t enough, as he finished well behind the third-placed Honda of Pedrosa.

With Rossi powerless to progress any further, he needed both Hondas to beat Lorenzo to hand him the championship but they couldn’t pull the moves he needed.

From pole position, Lorenzo rocketed away at the start into the lead, from Pedrosa and Marquez. Marquez dived past Pedrosa into second at Turn 2.

Aleix Espargaro ran fifth for Suzuki, ahead of brother Pol on his Tech 3 Yamaha.

After six laps, Rossi was already in seventh and chasing the Espargaro brothers.

Rossi elbowed his way past Pol Espargaro at Turn 6 after eight laps, elevating him into the top six.

He then got into a tussle with Aleix Espargaro, and needed two attempts to get past him – with the Suzuki man re-passing him out of Turn 1 to show that this was not someone prepared to let him past.

With 18 laps to go, Rossi was past Dovizioso and into fourth – five points shy of Lorenzo’s points total. But with Lorenzo at the first corner, Rossi wasn’t even at the final turn with a half-mile straight between them.

Lorenzo and Marquez fought out a private duel for the lead, the Honda man tracking the Yamaha’s every move.

With nine laps to go, Marquez was right on Lorenzo’s tail and lapping 0.2s quicker, but – more significantly – Pedrosa raised his pace with seven laps to go and was catching both bikes in front of him at a rapid rate.

With three laps to go, Pedrosa was within a second of the leaders, and was right on their tail a lap later.

He then passed Marquez, then ran wide and allowed his teammate through again. Their battling allowed Lorenzo to get away briefly.

On the final lap, Lorenzo clung to his lead despite the Hondas’ best efforts, with Rossi’s fourth place not enough for his eighth MotoGP title.

Aleix Espargaro dropped back behind both Tech 3 Yamahas, while brother Pol got ahead of Dovizioso for fifth but was well behind Rossi. Smith also passed Dovizioso with four laps remaining to finish sixth.

With Cal Crutchlow not starting from the second row due to a technical problem on his LCR Honda, Rossi started from 25th on the grid instead of 26th.

He made great progress off the startline and opening corners to run 16th after the first sector, and passed Loris Baz on lap one for 15th, then Nicky Hayden for 14th at Turn 2 on lap two.

He also moved ahead of Yonny Hernandez and Alvaro Bautista on the second lap.

Rossi overtook Stefan Bradl for 11th at the start of lap three, then nailed Pirro a few corners later to enter the top 10.

He gained another place when Iannone crashed out, but got stuck behind Bradley Smith, who was battling with Danilo Petrucci.

Rossi passed Smith on lap four, and quickly scared Petrucci off the track at Turn 2 on the following tour – and by then was running with the leaders.