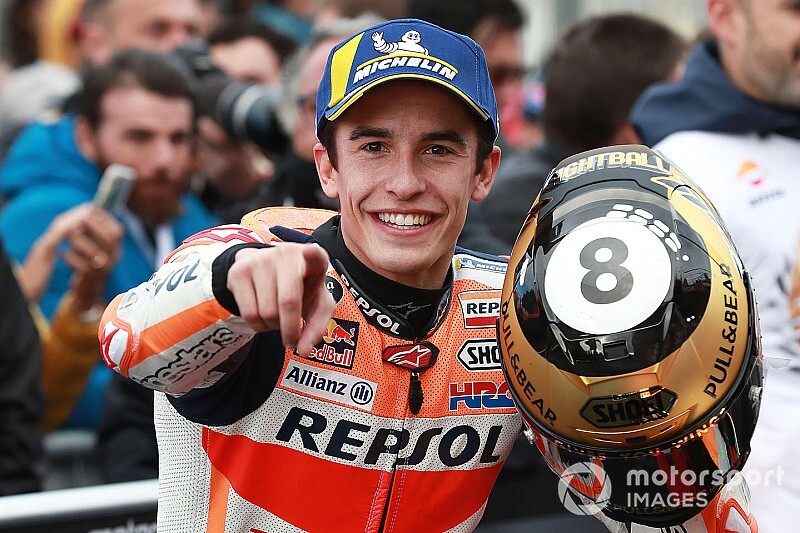 Marc Marquez capped of his sixth title-winning MotoGP season with a dominant victory in the Valencia Grand Prix to secure the teams’ title for the Repsol Honda squad.

Petronas SRT Yamaha’s Fabio Quartararo led for the first seven laps before being passed by a recovering Marquez, and was unable to mount a challenge to retake the position over the remaining tours.

Poleman Quartararo ran side by side with Pramac’s Jack Miller on the run to the first corner at the start, but had to concede the lead to the rocketship Ducati.

He quickly disposed of Miller after a couple of corners and began to build up a small lead, while Marquez had to fight through from sixth after getting hung out at the first turn from second on the grid.

Quartararo held a margin of seventh tenths by the third lap, with Marquez soon up to second after snatching the place from Miller at the final corner at the end of the previous tour.

The Honda rider slashed Quartararo’s lead by a couple of tenths over the next three laps, and made his decisive move on the eighth tour at the Turn 11 left-hander – squeezing Quartararo out to the edge of the circuit on the exit.

Marquez immediately got his lead up to six tenths, though Quartararo was able to ensure this remained stagnant for a handful of laps.

However, with nine laps to go, Marquez moved a second out of reach for the first time and would ease across the line for his 12th win of the year by over 1.5s.

Quartararo came under some threat from Miller after he was passed by Marquez on lap eight, but was able to quash the Pramac rider’s challenge and ended a sensational rookie season with his seventh podium.

Miller secured the final place on the podium ahead of Suzuki's Alex Rins and Ducati's Andrea Dovizioso.

Maverick Vinales’s expected challenge for the victory never materialised, and he was resigned to sixth on the works Yamaha ahead of Joan Mir (Suzuki), team-mate Valentino Rossi, Aprilia’s Aleix Espargaro and his KTM-mounted brother Pol.

Jorge Lorenzo ended his career in MotoGP with his best result of the year since June’s Italian GP in 13th.

Fellow Honda rider’s Cal Crutchlow and Johann Zarco of LCR failed to see the chequered flag after crashes, with the latter walking away from a horrifying incident.

Zarco lost the front of his RC213V going through Turn 6, with Tech3 debutant Iker Lecuona doing the same out of 15th place just seconds later.

As Zarco got to his feet he was struck by the KTM. Both he and Lecuona appeared to escape uninjured.

Valencia MotoGP - the race as it happened