AUSTIN, Texas – Circuit of The Americas (COTA) today welcomed veteran MotoGP rider and native Texan Colin Edwards and Moto2 newcomer Josh Herrin for some chilly track laps and a question-and-answer session with journalists in advance of their 2014 season. Edwards and Herrin are two of only three U.S. riders competing in the two series this year.

The colder-than-normal temperatures and bone-chilling wind kept Edwards from his scheduled track laps; however, he did allow a friend who accompanied him to suit up and get some track time. The intrepid Herrin, a 23-year-old Californian who now calls Georgia home, braved the cold and took a street bike out for several trips around COTA’s 3.4-mile racing circuit, in between bouts of strong winds that pummeled the track all day. 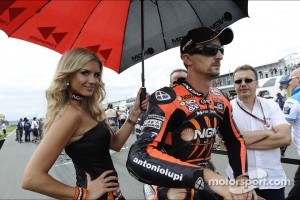 Both riders addressed a variety of topics with assembled media during a midday luncheon; here are the highlights:

ON EXPECTATIONS FOR THE 2014 SEASON… “We’re on Yamahas (engines) so it’s got to be better. Obviously we have a good package this year. I’ve tested a couple times. I’m headed on a plane here in about a week to go to Malaysia to do our first test and I’m looking forward to it. We’ve got a couple things in the works, chassis-wise, and we’re building and it should be better absolutely.”

WHAT IT WAS LIKE TO RACE IN HIS HOME STATE OF TEXAS… “It was awesome. I think it’s the first track I’ve driven to in, I don’t know, 25 years… since I started racing. It was crazy to jump in my truck, load the kids up and haul ass! Just the atmosphere was… the only thing I can compare it to was when we went to Shanghai, China, and raced in there in 2007 or 2006. You drove up, and it was phenomenal how big the facility was. And I think that was my first real taste of seeing what can be built for a race track. And here was the exactly same way. When I drove up for the first time and did the PR event at the beginning of last year, I drove up and was like holy crud! This is in my backyard. So it’s a pleasure to come here and race because they’ve done a fantastic job of building this facility.” Josh Herrin and Colin Edwards respond to media questions during an informal pre-season practice session at COTA.

ON ESTABLISHING HIS OWN MOTORCYCLE RIDING SCHOOL, THE COLIN EDWARDS TEXAS TORNADO BOOT CAMP NEAR HOUSTON, TEXAS… “We built a hotel, covered a football field more or less. We’ve got three or four tracks on the property. Once you arrive nobody ever leaves. We ride motorcycles all throughout the day, shoot guns after lunch, and when the motorcycling stops, we have a few beers around the fire and tell horror stories. People seem to enjoy that a lot.”

ON HIS FIRST IMPRESSIONS OF COTA… “I didn’t have the opportunity to go to the GP last year or Formula 1 race and immediately when I pulled down the driveway I was like, this place is sick! It’s so much different than what I’ve seen as far as race tracks go. The coolest thing is that it’s in the U.S.; you don’t see stuff like that in the U.S. very often just because racing in general isn’t a big thing in the States compared to Europe. My expectations were blown away. I didn’t think it would be this nice. It was fun on the track. The design is really nice.”

ON HOW VALUABLE TODAY’S TRACK SESSION WAS FOR HIM… “It will make it so much better. Even though we didn’t get a lot of laps today having track time on a new track is so helpful. When I went to Jerez for the first time, I played a million laps on video games. I watched all of the on board footage. Even then it’s so different learning the track.” Herrin, a 23-year-old rookie from California, tests the COTA track during chilly temperatures.

ON JUMPING UP TO MOTO 2… “Anyone that races AMA, it’s a dream come true to race on the world stage—any sport that you do really. It’s a once and a lifetime opportunity and to be the only American doing it, is really cool for me to represent my country, I guess.”

ON BEING THE ONLY AMERICAN IN MOTO2 THIS YEAR… “If anything there’s more pressure. With Nicky and Colin racing in the GP class, you know they’re going to do well. Me being the new guy and the only American, they are going to expect me to do well.”

ON THIS YEAR’S RED BULL GRAND PRIX OF THE AMERICAS AT COTA… “I think it’s going to be the most exciting time of the year, coming home. I always see Nicky and Colin are really excited to go in front of their home crowd, and I can see why. I went to the last race in Spain, and it’s just full of Spanish fans, and I can see coming here being in front of a 100,000 people. It’s going to be pretty exciting.” Herrin told reporters he learned a lot during his first laps around COTA's 3.4-mile circuit.

Circuit of the Americas

Bridgestone heads to Malaysia for first group test of 2014