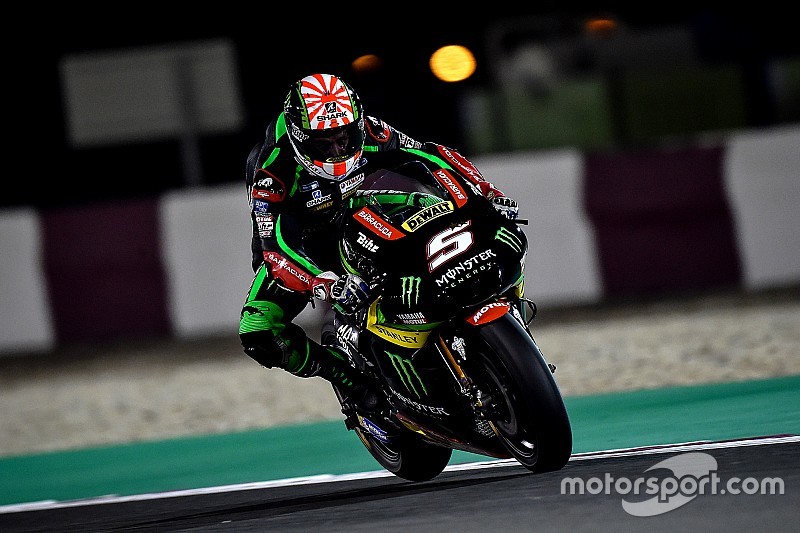 MotoGP’s top riders have lavished praise on Johann Zarco for an impressive rookie showing in Qatar, in which the Moto2 champion led before crashing.

Zarco had turned heads by qualifying fourth for his first-ever premier class start on the strength of his practice times, and had soared into the lead by the end of the opening lap.

The Frenchman opened up a lead of 1.6 seconds at the head of the order, only to lose the front end of his Tech 3 Yamaha at Turn 2 on the seventh lap and crash out.

Despite his failure to finish, Zarco’s showing earnt him acclaim from his more experienced rivals.

“I was curious about his performance in MotoGP because [Rossi protégé] Franco Morbidelli always said Zarco did something special in Moto2, and he will be fast in MotoGP.’

“It was a mistake of inexperience in the conditions, but it was a great performance.”

Rossi also joked that being behind Zarco – as well as his Tech 3 Yamaha teammate Jonas Folger – had been a “nightmare” for him during a troubled pre-season.

The Italian quipped: “It was my nightmare during the winter tests because [Zarco] was always in front! But also Folger was a surprise - we knew from Moto2 that he was good, but not a world champion like Zarco.

“The bike they have is maybe a bit more easy to ride and it's at a very high level. The Yamaha is a great MotoGP bike that is a friend of the rider.

“In the race, with the pressure, they need time and they need experience – but they did a great job.”

Dovizioso: Tech 3 rookies will only get better

Ducati’s Andrea Dovizioso, who finished second behind Vinales, echoed Rossi’s sentiments, saying that both Tech 3 rookies will be formidable contenders once they get more race experience.

“For sure they will be very competitive through the season,” said the Italian of Zarco and Folger, who finished 10th on his debut.

“They have a good bike, but also they don't the experience in MotoGP of how to manage everything so it's normal that they can make a mistake.”

On Zarco’s crash, he added: “He had a soft tyre like me, I think he was trying to push because he was leading and he wanted to go fast, but 20 laps is different.

“It was impossible to push from the beginning to the end. For sure, he will be fast in the future. But maybe he pushed too much in that part of the race.”