Third row start in Catalan GP for Iannone, eighth in qualifying at Montmelò 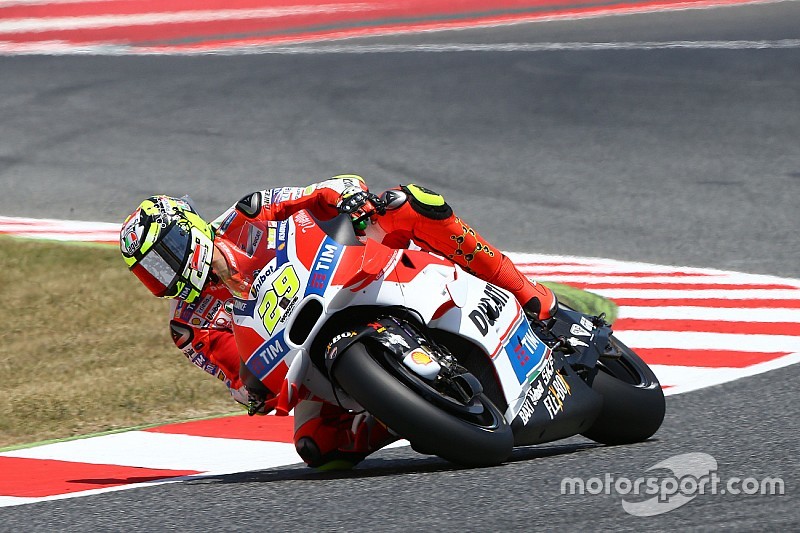 Dovizioso will start from row 4 in tenth place

Andrea Iannone and Andrea Dovizioso (Ducati Team) notched up eighth and tenth quickest times in today’s qualifying session at Montmeló, positions that mean the two Italians will line up on the grid for the Catalan GP, scheduled for 2 pm at the circuit on the outskirts of Barcelona, from the third and fourth row.

The Catalan circuit has been modified since yesterday in the final section, before the main straight, in the wake of the tragic incident involving the Spanish Moto2 rider Luis Salom. This morning the MotoGP riders went out on track for a one-hour FP3 session (instead of the usual 45 minutes), during which they had to learn the new circuit layout and earn a top 10 place that would take them directly into Q2 in the afternoon. Iannone was tenth-quickest with a time of 1’45.517 while Dovizioso, less than one-tenth of a second slower than his team-mate, classified twelfth and as a result had to take part in Q1. In this session he placed second with a time of 1’44.656, just behind the Ducati of Hector Barber (Avintia Racing).

In the decisive Q2 run, the two Ducati factory men were however unable to achieve the required performance and they had to settle for the third and the fourth rows of the grid for tomorrow’s 25-lap race.

“We are working to reduce the gap from the leaders, but we are struggling a lot at this circuit. The bike tends to slide about a lot and I am not able to have the corner speed I would like. We are trying to find a solution that allows us to make a step forward and despite this problem, I believe that tomorrow it will be possible to do a good race. We don’t have the pace of the guys at the front but, if we manage to maintain a constant pace and preserve the tyres, which deteriorate very rapidly, we might be in a position to score a good result.”

“I managed to improve my times in the afternoon, during FP4, and so I am quite happy. Unfortunately however I didn’t do a good qualifying session, because I was not able to ride well because of the scarce feeling with the hard front tyre, which meant that I couldn’t push hard, and so I made a few mistakes that didn’t allow me to set a good time. It’s true that we are starting behind, and that’s a pity, but if I manage to get a good start tomorrow like at Mugello, I know I have good pace and I feel that my bike set-up is not so bad for the race. The tyre drop-off will affect everyone a bit and we will only be able to see who is the most competitive as the laps go by.”