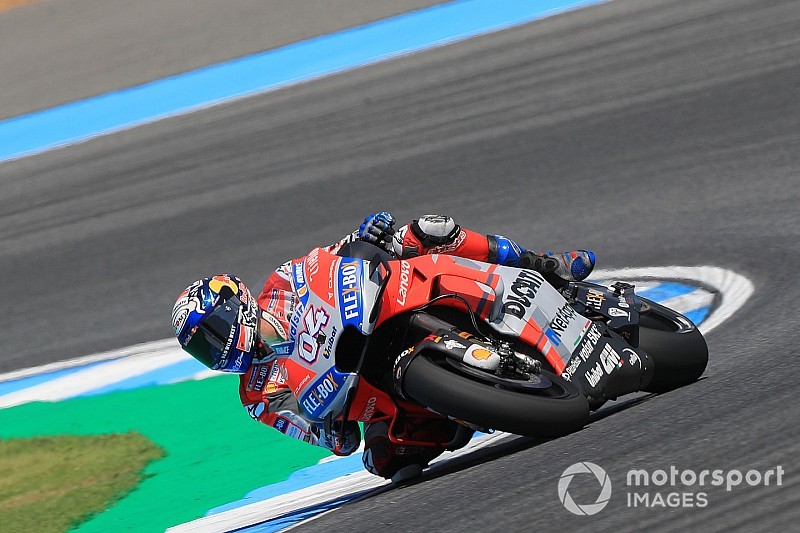 Honda’s Marc Marquez wasted no time when the session got underway, immediately moving to the top of the timesheets with a 1m31.904s flyer, before posting a 1m31.188s lap to move further clear of the chasing pack.

That time remained unbeaten until the final four minutes when FP1 pacesetter Maverick Vinales improved by just 0.067s to seize the top spot.

Dovizioso then managed to go quicker still, breaking the 1m31.1s barrier to end the session with the fastest time. However, his time of 1m31.090s was more than a second slower than what Dani Pedrosa managed in pre-season testing earlier this year.

Behind Dovizioso and Vinales, LCR’s Cal Crutchlow ended third-fastest, knocking off Marquez with a late flyer of 1m31.164s.

Marquez experimented with the soft rear tyre for his final run but was unable to improve on his previous benchmark, ending up 0.050s quicker than Danilo Petrucci in fifth and a further 0.018s clear of top Suzuki rider Andrea Iannone.

Alvaro Bautista was classified seventh ahead of Pedrosa, who shadowed Marquez in a Repsol Honda 1-2 in the early part of the session before slipping down the order.

Valentino Rossi finished ninth fastest, less than three tenths off his teammate, while the top 10 was completed by Tech 3 rider Johann Zarco.

Lorenzo was braking into the turn 3 right-hander when he suddenly lost control of his Ducati, suffering a scary highside crash that left his bike torn into half.

The Spaniard was able to sit down without assistance but needed a stretcher to be escorted to the medical centre for precautionary checks.

It remains unclear if he aggravated injuries - which includes a dislocated toe and a fractured bone in his right leg - that he sustained in a similar highside at the start of the Aragon GP a fortnight ago.

He was deemed fit after early checks, but is now subject to further examination.

Xavier Simeon crashed at the same corner minutes later, bringing out a brief red flag as marshals cleared debris and oil from the track.