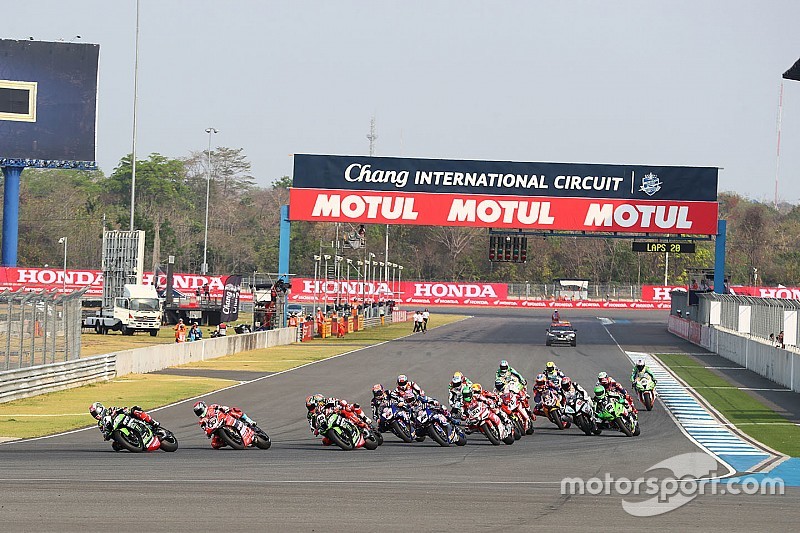 Valentino Rossi says he is "not very happy" about going to Thailand in 2018 if the "not interesting" Buriram circuit joins the MotoGP calendar as expected.

Thailand is set to be added to the schedule next year, with the Herman Tilke-designed venue that was opened in 2014 and has hosted the World Superbike Championship since '15.

While any deal is yet to be acknowledged by MotoGP promoter Dorna, the Sports Authority of Thailand has indicated it had struck a three-year agreement to host a grand prix, naming October 5-7 2018 as the maiden date.

It is expected that it would be paired with one of the three flyaway races in Asia and Australia, moving from races on three consecutive weekends to two pairs of two.

However Rossi said he was not looking forward to racing at the Buriram circuit, roughly 250 miles north-east of Bangkok.

"I was in Thailand for Yamaha two years ago and the track is not interesting," he said.

"It’s very boring, has not a lot of corners, just long straights. I think it’s not the best place to go.

"And also where is the track is quite bad, it’s far from everything.

"So I’m not very happy to go to Thailand, essentially, on that track. But if we have to go, we’ll go."

Thailand’s addition would take the MotoGP calendar to 19 races, with projects in Finland and Kazakhstan both waiting in the wings.

Dorna CEO Carmelo Ezpeleta has said the championship will "never" exceed 20 races in a year, and Rossi believes the current 18 is "already a good number".

Reigning champion Marc Marquez said he felt "18 races is already a lot", and would rather the calendar not grow beyond 20.

"I don’t know the plan in the future, but maximum 20 races will already be the limit for the riders," he said.

"But, OK, Thailand is a new track, I like new tracks. Always when we go to new tracks I feel good. So why not?"

Rins to return to MotoGP action in Barcelona test