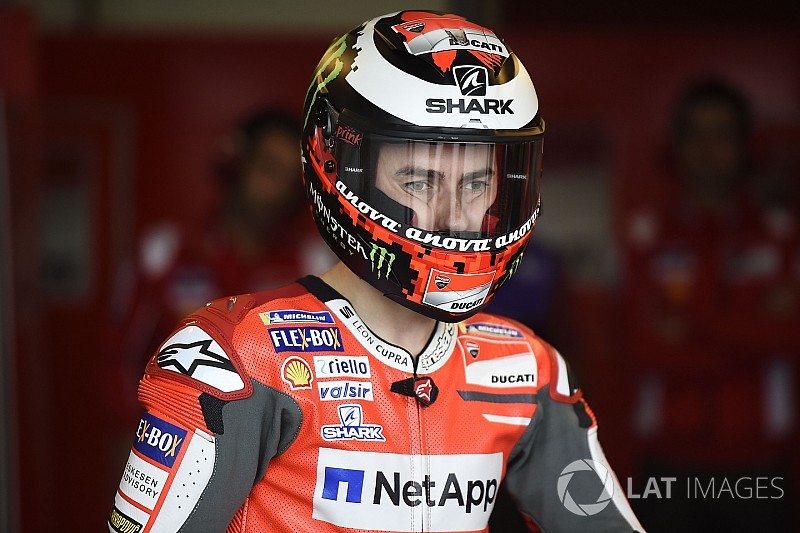 While Rins is all but certain to extend his relationship with Suzuki beyond the end of the year, the Hamamatsu marque is thought to have run out of patience with Andrea Iannone and is searching for a replacement for the Italian.

Iannone has failed to live up to his role as Suzuki's lead rider since joining at the start of 2017. He finished 13th in last year's standings, and has also been outperformed this year by Rins, who took the squad's first podium finish since 2016 last weekend in Argentina.

Lorenzo has emerged as Suzuki's preferred choice to partner Rins for 2019, with many in the team convinced that the GSX-RR would be a good match for the Ducati man's smooth riding style.

After a challenging debut season at Ducati last year, Lorenzo has continued to struggle to feel comfortable aboard the 2018 version of the Desmosedici, having scored just one point in the opening two races of the season.

His lack of results, combined with the rise of Andrea Dovizioso as Ducati's number one rider, means Lorenzo will not be able to command the 12 million euros a year he earns currently if he stays put in 2019.

Set against the backdrop of growing doubts over whether Lorenzo will ever be able to fully adapt to the Ducati, a switch to Suzuki would appear to offer a clear way out of the situation.

The next three races will be critical, as a sudden resurgence in form could convince Lorenzo to stay put even with a pay cut; he would also have to come to terms with the fact Suzuki doesn't have the resources to ever offer him the kind of money he is currently earning.

However, Suzuki's alternatives to Lorenzo are limited, and it has decided - for now - to throw its efforts into convincing the 30-year-old to jump ship.

Pedrosa in doubt for Austin after undergoing surgery