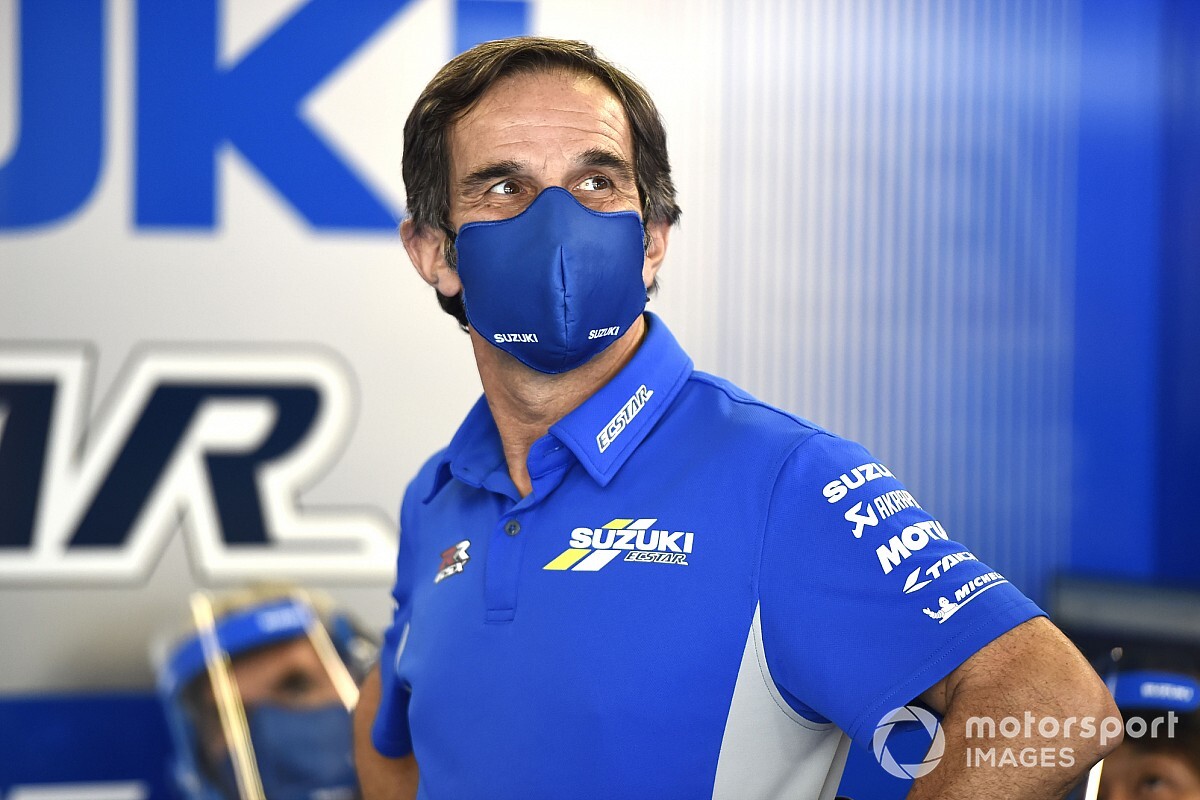 Suzuki team boss Davide Brivio has criticised MotoGP’s Stewards Panel for being given “too much importance” and feels stewarding needs rethought.

The efficiency and consistency of MotoGP’s Stewards Panel – headed by double 500cc world champion Freddie Spencer – has come in for criticism in recent weeks, following a number of questionable judgement made during the Austrian double-header.

Suzuki was one of the most vocal after it felt KTM’s Pol Espargaro should have been penalised for running off track at the last corner of the Styrian GP instead of holding third.

As Espargaro was forced wide by Jack Miller, he was deemed not to have gained any lasting advantage – a ruling which angered Brivio and fourth-placed Joan Mir.

Riders were also critical of Moto2 riders Jorge Martin having his Styria win stripped for running onto the green paint outside of the track on the final lap as he didn’t gain an advantage – though the punishment was consistent with the regulations, in that any track limits violation on the last lap results in being docked a position.

Speaking to Motorsport.com, Brivio feels the “interventionism” of the Stewards in MotoGP has to be “reduced to the maximum”.

“I think that stewards are being given too much importance in a discipline in which they should hardly intervene,” Brivio fumed.

“This is not soccer or basketball, they need a referee to judge whether an action is a foul or not.

“These are races in which the one who reaches the finish line first comes out and wins.

“The way I see it, the interventionism of the Stewards should be reduced to the maximum, and that is achieved with a more precise regulations.

“Control is necessary, but the one that exists today is overly conditioning the results.”

Current track limits rules state any exceeding of them during practice or qualifying results in the deletion of the sector in which the transgression occurred – thus cancelling the lap.

In a race, riders are permitted to run off track three times before a warning is issued, with a fifth offence resulting in a long lap penalty - while final-lap offences are rewarded with a one-place drop.

But Brivio thinks this needs to be amended as it invites riders to take risks “more than necessary”.

“Some rules depend too much on the interpretation of the Stewards,” he added. “And when that happens, you open the door to subjective judgment.

“Race Direction says that the rule is clear, and that you cannot step onto the green zone if the rider who does it “takes a clear advantage of it.

“But of course, my interpretation of what is a clear advantage may be different from yours. It turns out that one can exceed the limits up to four times before being penalised.

“So, what they are promoting is that the riders risk more than is necessary, because they know that they can go off up to four times without anything happening to them.

“The principle of this discipline is that the bikes should stay on the asphalt.”

Race Direction confirmed during the San Marino GP weekend that no changes to track limits rules were being considered at this time, and that a zero tolerance policy to them wouldn’t be practical.