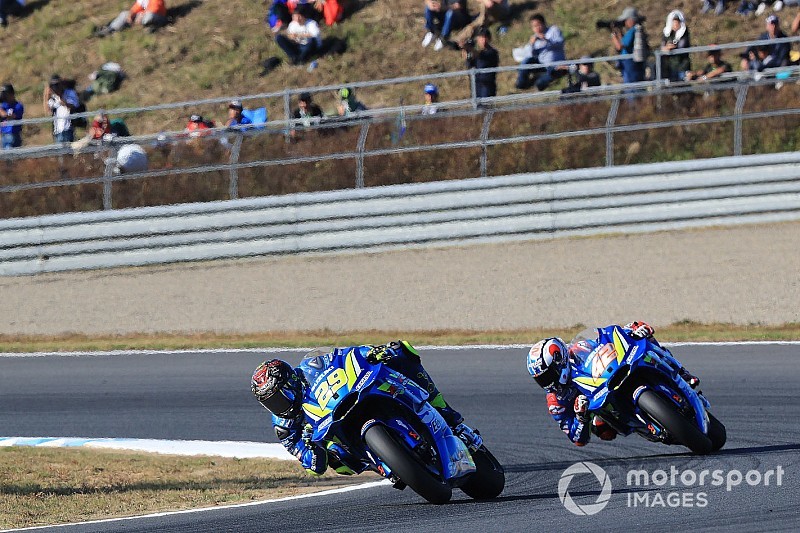 Suzuki MotoGP boss Davide Brivio insists that his team still wants to have a satellite outfit in the future, despite being unwilling to sign one for 2019.

During its involvement in MotoGP between 2002 and 2011, and since 2015, Suzuki has operated without a satellite outfit, scoring just two victories with Chris Vermeulen at Le Mans in 2007 and Maverick Vinales two years ago at Silverstone.

Suzuki had a torrid season in 2017 but was much improved this year and the team was even looking into signing a satellite team with Marc VDS one of the main contenders.

But ultimately the factory opted against a satellite effort, and Suzuki will continue in 2019 with the factory duo of Alex Rins and Joan Mir.

Brivio admitted that Suzuki's financial constraints make it difficult to have a satellite team, but it continues to be a "target" nonetheless.

"This is an ongoing discussion for us inside the company," said Brivio.

"As a team, we would really like to have a satellite team here to get much more information and to develop even further the bike and everything.

"But for the company it is a big effort because anyway we don't have so much resources and not so many people like maybe our competitors.

"Anyway we keep discussing and I hope that we are able to do something for the 2020, even if looks like the situation with the teams, they are all committed for 2020, so it might be difficult.

"But this is something that is in our mind, our discussion and is a target for Suzuki but still the decision has to come."

With Tech 3 joining KTM and the newly-formed SIC Petronas squad running Yamahas, Suzuki and Aprilia are the only two manufacturers with only the factory teams.

Aprilia boss Romano Albesiano said that having a satellite team is not on the agenda at the moment, and the team's focus is on making the most of its newly-formed test team led by Bradley Smith.

"For Aprilia is not a primary target, we decided to invest in the test team, doing wildcard participations at the right level.

"This, being focused on the two factory riders plus one high-level test rider, it is the best way to develop for a structure that is not giant like we are."