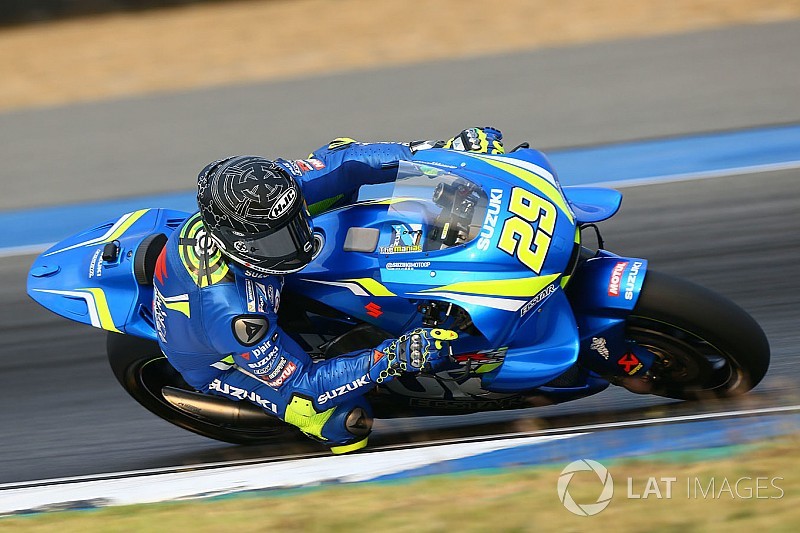 Suzuki MotoGP boss Davide Brivio is “optimistic” his team will gain a satellite operation for 2019, amid talks between the Japanese marque and Marc VDS.

After a disastrous 2017 campaign that resulted in Suzuki failing to score a podium finish all season, Brivio admitted the team had been hindered by not having a satellite operation to assist bike development.

It followed an admission that a wrong choice of engine specification made in pre-season testing by new recruit Andrea Iannone effectively wrecked its hopes for the year.

While Suzuki has long since expressed an interest in establishing a second team, Brivio indicated that a deal to field two extra GSX-RRs for 2019 may not be far away.

Marc VDS, which currently operates Hondas, is known to be in talks with Suzuki about becoming its satellite operation.

“Our main goal is to establish a satellite team for 2019,” Brivio told Motorsport.com. “It’s just a matter of finding the required resources. I’m quite optimistic, more than last year.

“A satellite team would help us a lot because it would allow Suzuki to get more data and pursue different directions of development at the same time.

“We just need to work out exactly what it would mean in terms of spare parts, engineers and so on.”

While both Angel Nieto (formerly Aspar) and Avintia have expressed interest in replacing Tech 3 as Yamaha’s satellite, Marc VDS suggested it was looking for a longer-term commitment.

"What we want is to link ourselves to a manufacturer which offers us a long-term project," said a spokesperson from the Belgian team.

Suzuki, KTM and Aprilia currently only operate their own works bikes, but MotoGP promoter Dorna is keen to see all six manufacturers field four machines apiece.

KTM is set to align with Tech 3 in 2019 in the wake of the French outfit’s split with long-time partner Yamaha, which would leave only Aprilia needing to find a team to tie up with in the event Suzuki and Marc VDS join forces.