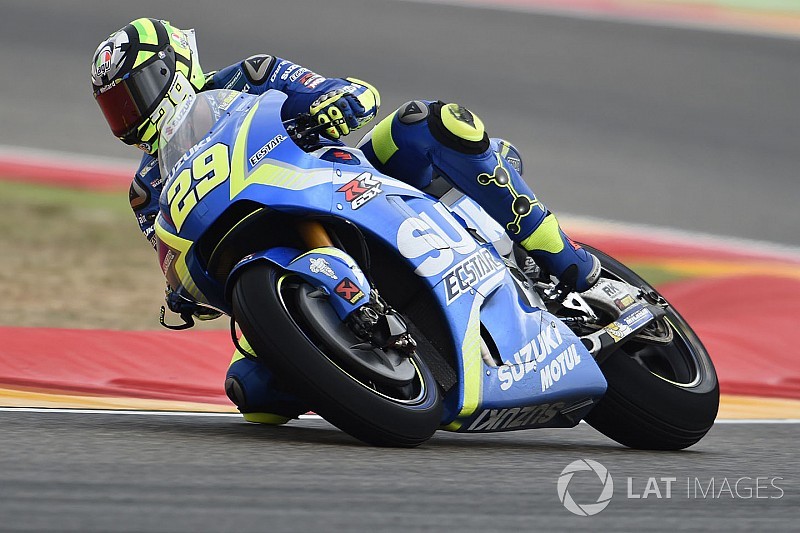 Suzuki's 2017 MotoGP season has been hampered by Andrea Iannone choosing the wrong specification of engine to be homologated in winter testing last year, Motorsport.com has learned.

After winning its first race since 2007 at Silverstone with Maverick Vinales last year, Suzuki has endured a difficult 2017 season, with riders Iannone and Alex Rins sitting 16th and 20th in the standings.

Iannone, recruited from Ducati to replace Vinales, has suffered a particularly torrid time aboard the GSX-RR, scoring just two top-finishes this season at Austin and Assen.

One of Suzuki's weak points this year has been its engine, specifically its character and how it reacts.

Last year, Vinales and his teammate Aleix Espargaro realised last year that they could enter some corners aggressively, but lacked acceleration exiting them, as well as top speed.

To compensate for this problem, Suzuki built a new engine that wasn’t tested on track until last November's Jerez test, some days after the end of the 2016 season in Valencia.

Rins didn’t take part in that test as he was injured after a crash in Valencia, giving Iannone sole responsibility in terms of decision-making.

At Jerez, the Italian tested the two available engines: one with the 2016 base, and another one with a new setting, and concluded that the latter was clearly better.

Suzuki therefore homologated that specification for the season - but the team's poor results have led the team to think that Iannone's initial feedback about the engine may not have been accurate.

This theory was seemingly proved after both riders tried an engine that was very similar to the 2016 one after last month's August race, and ended up pleased with its benefits and performance.

“In the test we did after Brno, Alex tried an engine with similar specs to the 2016 and was very happy," Brivio told Motorsport.com. "Andrea had already tested it and gave us the same feedback.

"The problem is that we can’t use it, as per the rules."

Suzuki stayed on at Aragon for a two-day test this week, continuing to compare the 2016 and 2017 engines and also evaluating chassis improvements for the forthcoming flyaway races.

"We’re satisfied by these two days because it is important to find some time, away from the pressure, to get back to some things we've previously tried, and also to try new improvements," said Brivio.

"We could test new configurations to be used within the remaining portion of this season, and also test some new pieces for the 2018 machine that we would like to have ready for the Valencia test in November.

"We would like to test the first new 2018 configuration there."