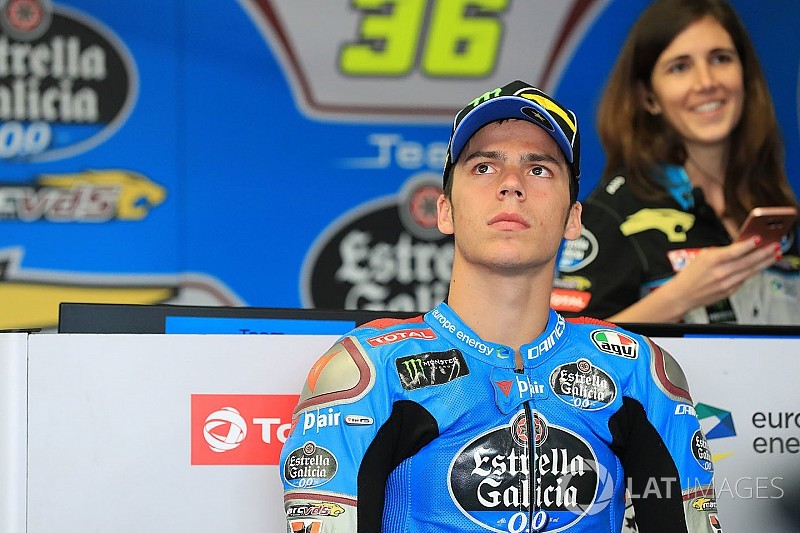 The Suzuki MotoGP team has confirmed it will promote Moto2 ace Joan Mir to the premier class next year.

Mir, 20, will replace Andrea Iannone aboard a works Suzuki GSX-RR for the next two years, partnering Alex Rins, who had been officially retained back in May.

Mir emerged as the next big thing in grand prix racing when he won the Moto3 title in his second year in the category in 2017 – claiming 10 wins along the way, the best lightweight-class tally since Marc Marquez's 125cc title run seven years prior.

He adapted quickly to Moto2 after joining frontrunning outfit Marc VDS, and currently sits fifth in the standings in his rookie year, having picked up back-to-back podiums at Le Mans and Mugello.

“He is fierce, he is witty, he is nice and he can be very fast. All the characteristics that we like to search for in a young rider, who wants to join us not only for the prestige of a factory machine in the top class but most of all because he believes in our racing project.

“Talking to him I realised how much he has a clear mind, how much he liked our Suzuki project and wanted to join us. This has been a great boost for us.

“Of course, we know very well that he will need time to gain experience and grow with us, but we have full confidence in his potential.”

Mir's successes in the lower categories had made him a hot property on the MotoGP rider market for 2019, and he even had a pre-contract with the works Honda team.

But that option was not exercised, and Suzuki went after Mir instead – the Hamamatsu marque having initially targeted Jorge Lorenzo, who has now wound up at Honda.

Mir will become the third rookie rider picked up by the Suzuki factory team since its return to MotoGP, as it previously hired Maverick Vinales and Rins out of Moto2 for 2015 and 2017 respectively.

Vinales, now at Yamaha, has scored the team's most recent victory, at Silverstone in 2016.

“As a team we have always tried to look forward to long-term development plans, which includes also making some bets on young riders that we feel can be an investment for the future,” Suzuki MotoGP project leader Shinichi Sahara said.

“We did it in our debut year in 2015, we did it again in 2017 when we signed the debutant Alex Rins, who has been confirmed also this year, and we are further confirming this with the agreement with Joan Mir.

“He is a young talent we would like to see grow and help us to grow the GSX-RR and the team with him.”

Is Honda's Lorenzo swoop a masterstroke or madness?