Following his break from action yesterday after over-stretching his back 2011 MotoGP World Champion Casey Stoner returned to action today for the Repsol Honda team and to the top of the timing sheets ahead of Yamaha Factory Racing teammates Ben Spies in second and yesterday’s fastest man Jorge Lorenzo in third.

Stoner set off in good shape this morning and was immediately on the pace alongside teammate Dani Pedrosa and the Factory Yamaha machines. When stoner tested the early version of the 1000cc RC213V an area of concern for the Australian rider was the stability of the bike and he experienced some chatter, this is what Stoner worked on today as he compared two different chassis taken to the test by the Japanese Manufacturer.

I would have liked to have done a few more laps.

Finishing his first day of riding with a best time of 2m 895s Stoner was happy with his early pace, “It was great to be able to ride today and everything went pretty well, although I would have liked to have done a few more laps. We spent most of the day on the new chassis comparing it back to back with the one we had in Valencia and we found a good direction and where we want to go. As usual it would be great to take some elements from one chassis and some from the other, but at least we found the direction we are happy to follow.

We used the hard front tyre this afternoon but found we had more chattering with it so we have to work on this, there is still room for improvement. We didn't get a chance to use the new spec tyres that Bridgestone have brought here, we'll try them out tomorrow and go from there,” Stoner added.

Spies got to grips with his new 1000cc quickly and managed to edge past Lorenzo on his second day with a best time of 2m 1.052s. “We got going pretty well in the morning, then even when the track started to slow down the pace was still really good,” said the American while continuing, “We started to mess with the balance of the bike a little today and played with the electronics to find a good foundation with the bike. At Valencia we compared some stuff and got in the right direction. Now we’re here and taking the next step, trying some things to see how it affects the set up. There’s definitely some room for improvement and some areas we’re not struggling with at all.” 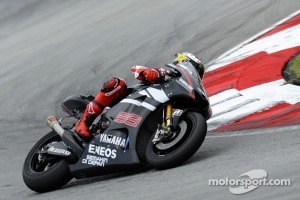 Lorenzo was on the pace throughout the day but didn’t go for any big laptimes and set a best lap of 2m 1.068s. “Today I was much more tired than yesterday so it was tough to finish with a good pace but we managed it. We didn’t find any big improvements but some small details. Tomorrow we hope to make one big step. We improved our lap times a lot in the morning but in the afternoon when it was even hotter we managed to go faster which is very positive,” he said.

Pedrosa ended his day in 4th place after a long day of testing different settings on his machine and eventually settled for his best time of 2m 1.508s that he set on his second last lap of the day. Monster Yamaha Tech 3 rider Cal Crutchlow followed up his third place finish yesterday with a solid 5th place today and a best lap of 2m 1.565s.

The top Ducati of the day came in the form of Hector Barbera and his Pramac Racing Ducati machine and setting a best lap of 2m 1.788s on his final lap of the day to finish ahead of Ducati’s number one rider Valentino Rossi who set a best time of 2m 1.886s after a long day of testing different settings on his machine. sBautista (2m 1.933s) finished his second day on the San Carlo Honda Gresini machine in 8th place ahead 9th man Andrea Dovizioso for the Monster Yamaha Tech 3 team (2m 2.160s). 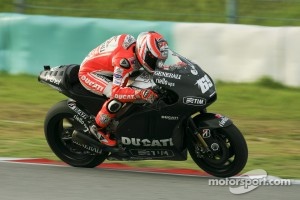 Nicky Hayden had a short outing on his bike today after aggravating his recovering left scapula that he injured during the Christmas break and could only manage to do a handful of competitive laps and set a best lap of (2m 2.354s) before resorting to sitting out most of the day and Ducati test rider Franco Battaini taking over for the rest of the day. Stefan Bradl hand another productive day on the LCR Honda and finished the day in 11th place with a best time of 2m 2.414s. Karel Abraham ended the day in 12th position for his Cardion AB Motoracing team setting a best time of (2m 2.598s) ahead of Yamaha test rider Katsuyuki Nakasuga (2m 2.941s) and Battaini (2m 4.311s).

The CRT Class machines also continued their testing today and again it was MotoGP veteran Colin Edwards who showed the way on his Forward Racing Suter BMW bike and set a best time of 2m 5.603s. The Avintia Racing FTR Kawasaki team had a bad day today with engine problems. Ivan Silva ended up in 16th place with his best time of 2m 10.297s but the Spaniard suffered an engine failure during the test. Jordi Torres ended up in 17th with his lap time of 2m 11.893s but the Spaniard only completed two laps. Test rider Robertino Pietri was also out on track for the team and finished in 18th with a best of 2m 12.546s but he also suffered an engine failure.