Casey Stoner left the Sepang circuit in Malaysia today on top of the timing sheets on the final day of the first winter test of the year that was cut short due to heavy rain. Riding his new RC213V machine the Repsol Honda rider also broke last year’s testing record that he himself set. Stoner’s best time of 1m 59.607s came in just his second lap and no one else troubled him for the remainder of the session.

Stoner finished ahead of Yamaha Factory Racing’s Jorge Lorenzo 2m 0.198s who was working on a number of areas of his new YZR-M1 and in turn the Spaniard finished on front of his fellow countryman and Stoner’s teammate, Dani Pedrosa who had another steady day of testing to register a fastest lap of 2m 00.256s

So far it's been pretty positive, we'll just have to wait and see what we have for the next test

Speaking afterwards, Stoner was upbeat about his performance over the two days after missing the first with an aggravated back muscle. “It's been a good test in general, we only managed two out of the three days unfortunately but the weather has been really good to us and we've been able to do what we planned. The day I missed hasn't affected us too much and we've managed to complete our testing programme, to be honest I think track conditions on the first day weren't that great anyway as the lap times were not so fast.

I'm still not feeling great with my back but the bike is ok, so we've made progress in reducing the chatter a little more and trying a few different things, some small settings on the shock that we haven't tried before amongst other points. So far it's been pretty positive, we'll just have to wait and see what we have for the next test and hopefully improve a little more. Now I'm looking forward to getting home to Switzerland to see Adriana and await the arrival of our baby!” Stoner said happily.

Settling for second place Lorenzo remains confident that he and his team are moving in the right direction with his bike’s settings. “I’m really, really satisfied, I have improved on my best record here in Sepang” said the 2010 Champion who continued, “We tried a lot of things; some have been a lot better, especially one major improvement. We also know where we have to improve in the future. The electronics are not perfect yet, we still need to make it smoother but the bike has so much potential we are very optimistic. 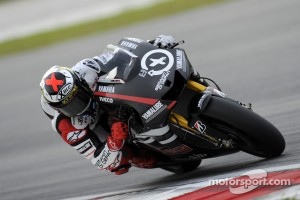 “The Yamaha engineers have worked really hard so they have done a good job. I made my best time today at midday, which is the hardest time with the conditions so it was pretty good. Let’s see what we can do when we come back,” Lorenzo added.

Pedrosa was content with his performance over the three days but is looking for big improvements in the bike’s stopping power and also chatter is still an issue, “Three days testing here in Malaysia is very tiring. This morning when I woke up I was pretty sore and stiff, but once I got running I was a little bit better. Anyway, it’s been worth it to do a general test of the engine, chassis and tyres and overall it is the biggest test we have done on this bike and we have good data to analyze and can start to build up points we need for the second test.

“As I said yesterday, the biggest point to improve is on braking, and we are also working on the electronics to improve the management of the power and the grip level. The chatter is still there, I know it's something very difficult to fix, but I’m sure Honda is working hard on it. In general, it’s been a positive test for us and we will come back here in three weeks with new ideas. This bike is physically more demanding, you feel the power in the acceleration, the speed under hard braking and also the extra weight, but it’s alright. I will keep working hard physically to prepare for the second test,” Pedrosa added.

Lorenzo’s teammate Ben Spies had another good day on the Yamaha and posted a best of 2m 0.495s to sit in 4th place on the timing sheets and one place ahead of seven-times MotoGP World Champion, Valentino Rossi who thoroughly enjoyed his first three days with his new Ducati GP12 machine. Rossi recorded a best lap of 2m 0.824s and was one of the busiest riders in the paddock over the three days. Fellow Ducati rider Hector Barbera (Pramac Racing) was once again on the pace and finished in 6th with a best time of 2m 0.929s.

The next man on the timing sheets was British rider Cal Crutchlow (2m 1.108s) and Crutchlow will go home a very happy man being as high as 3rd place on day one. Crutchlow also has the bragging rights over his new Monster Yamaha Tech 3 teammate Andre Dovizioso (2m 1.257s) although ‘Dovi’ is still building strength back into his collarbone on the right-hand side that he broke in a motocross crash in the off season. 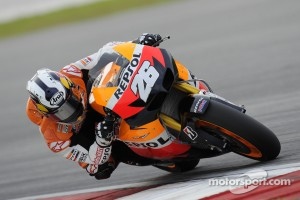 Sitting in 9th position on the final day was San Carlo Honda Gresini rider Alvaro Bautista who set a best time of 2m 1.384s to finish ahead of Nicky Hayden on his Ducati GP12 (2m 1.729s). Next man on the timing sheets was MotoGP rookie Stefan Bradl for the LCR Honda team and the reigning Moto2 World Champion worked hard during the test and set a best time of 2m 1.894s today.

Karel Abraham (Cardion AB Motoracing) was next on the list in 12th spot with a best lap of 2m 2.218s on his Ducati ‘GP Zero’ – a name that was given to the machine in the November test at Valencia last year. Yamaha test rider Katsuyuki Nakasuga finished the day in 13th place (2m 2.334s) and won the battle of the test riders finishing ahead of Ducati test rider Franco Battaini in 14th (2m 3.033s).