Stoner: I expected more from Lorenzo in 2017 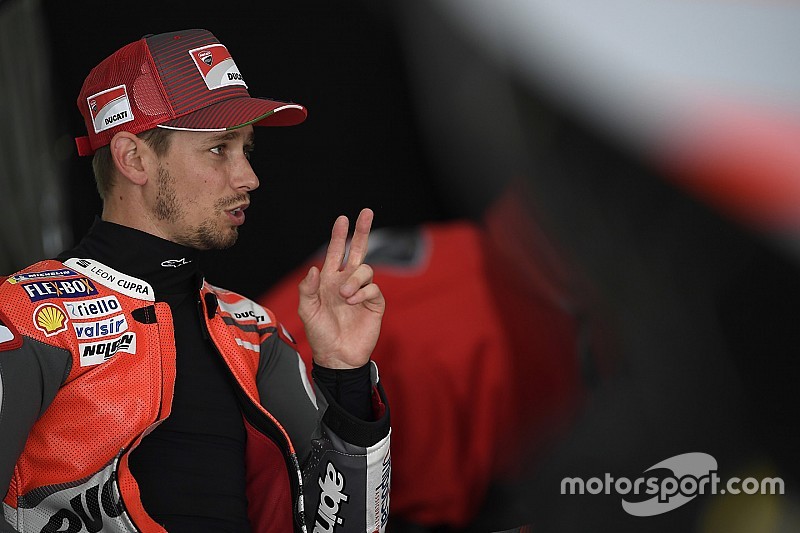 In the first segment of a two-part exclusive Motorsport.com interview, two-time MotoGP champion Casey Stoner reveals his thoughts on Ducati's progress last season - and a sub-par season for Jorge Lorenzo.

He may have retired five years ago, but Casey Stoner is still a major attraction in the MotoGP paddock.

The Southport-born rider went to Sepang to the first private test of the 2018 season, where Ducati asked him to assess the new Desmosedici GP18 after riding it for two days.

Now Jorge Lorenzo and Andrea Dovizioso are out to repeat what the Australian did in 2007, when Stoner took Ducati's first (and so far only) title in the premier class.

In between runs, Stoner had time to sit down and talk to Motorsport.com's MotoGP editor Oriol Puigdemont. This is the first of the two parts of the interview.

Considering that nowadays you don’t ride a MotoGP bike so often, how do you prepare yourself to be ready for a test like this and what impact does it have on you at the end of the sessions?

"Physically, I end up very tired. There is nothing you can do to prepare yourself for riding a MotoGP bike. Actually, you can see it on the riders. After the first pre-season test, they are all destroyed.

"On my own, the fact that I don't ride for five or six months and then I come to do the test makes things a little complicated. I do as much as I can but it is hard to prepare the muscles.

"I’ve arrived a little bit under-prepared to these tests in Malaysia. My second daughter, Caleya Maria, was born and I don't have any problem while sleeping, but I caught a virus and I haven't done any kind of training for a couple of months.

"I started to train again at the beginning of this year and between my baby, the virus, everything... I've only been training during the last month and that's why I'm a little bit under-prepared."

In a moment like this, when you have to decide which path to follow with the new bike, what does Ducati ask you?

"We take as a reference a standard set-up. Let’s say that bike is not set up for me. We have a balance and then we start trying parts and making comparisons.

"In general, you will always have the same comments from the riders, or at least, sometimes. We try not to be following one rider's direction, we just go out and compare different things: swing-arm, engine mapping and this sort of things.

"I just compare from the last, to the next and do lots of configurations. The final say is always to the riders, to comment on their preferences."

How close were you to racing in a Grand Prix again in the last two or three years? Was there any real possibility?

"Of course there was. I was close to coming back and race in a Grand Prix twice, but situations and circumstances didn't work.

"There were two races in which I was quite sure I was going to race, but no more than this."

Did you feel more competitive with the 2017 Ducati or with the one you had in 2007 when you got the title?

"In 2007, except for the engine, the bike from that year did nothing else well. I had problems going through the corners and coming out from them.

"At braking points it was quite good and it went pretty well in straight line. If you tried to do anything else, was very difficult. Now we have a better overall package."

Is this generation of the Desmosedici the best you’ve ever ridden?

"No. The bike from 2009 was really, really impressive, despite the fact I wasn't fighting for the championship because I couldn't [he was diagnosed with lactose intolerance].

"Now all the bikes have become so competitive, any bike can win in any moment. Let's say that our current bike is more balanced, in every circuit we have more chances to do a good result."

Did Dovizioso surprise you last year?

"For sure. I can't lie to you and Andrea can't lie. He probably didn't go to the season expecting to be so competitive. Saying that, his attitude, method and everything worked really good last year.

"He was very thoughtful in the races: he knew when to save the tyres, when to push... He made a really great season and the only negative point was that when he didn't win a race, normally he was in a difficult position, too far. We missed so many points in those situations."

"I won't lie: I expected more from Jorge. I can understand that nine years with a manufacturer is a long time, and it is difficult when you change to a very different bike and you try to get confidence.

"I think also Jorge struggled to get used to the Michelin tyres as soon as they started to change them a little bit. We saw him getting stronger as the season went on, but I assume this year he can be more often fighting for podiums and victories. We will see, but yes, I expected a little bit more."

Does the new bike suit him better?

"Yes, it does. It will be better for him and for everybody riding a Ducati.

"Jorge is a little bit more particular in the way he likes to ride the bike, but as you saw, he started to become more comfortable at the end of the year and the performance between him and Andrea was very similar.

"With completely different riding styles, they arrived at the same point. If we do some steps forward, both of them will take advantage."

Part two of the interview will be published on Motorsport.com next week.