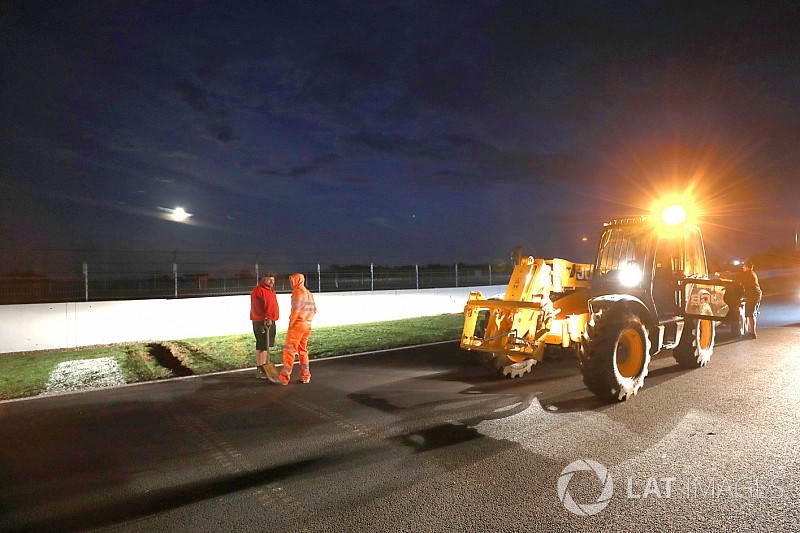 MotoGP Race Director Mike Webb has said the tarmac at certain corners at Silverstone will be cut overnight in a bid to improve drainage, as Sunday's race comes under threat from heavy rain.

Following a spate of crashes at Stowe during a heavy downpour in FP4 – one of which resulted in a serious leg injury for Tito Rabat – safety concerns were raised about the safety of the track with standing water.

With a number of riders branding it impossible to ride in such conditions, and with heavy rain forecast for Sunday afternoon, the decision was taken to move the MotoGP race forward to 1130 local time.

With Webb describing Stowe and Vale as the “worst places” for water accumulation due to both being re-profiled in a recent resurfacing, he admitted altering the camber of the corners is unlikely to “really do anything”.

As a result, he confirmed cuts will be made in the tarmac at both corners – as well as anywhere else deemed problematic – in a bid to stop rivers forming.

“Earthworks, that's pretty much out of the question,” he said.

“The problem, if I can use some other examples, heavy rain in Motegi, we've had Qatar, the downpour: that was a drainage issue where water from outside the track was running into the track.

“The problem we have in Turn 7 and to a certain extent Turn 8, is the natural drainage of the water of the track is putting the water in one place – it's not the outside of the track.

“Things like that we've done a number of times before, there are limited options because if the water is coming off the track it's easier to fix.”

Support races could be sacrificed for MotoGP

In case heavy rain arrives when MotoGP is scheduled to get underway, Webb has confirmed Race Direction will “favour” it to honour its agreement with event organisers to run the premier class race.

While keen to run the Moto2 and Moto3 races as planned, he admits there is a chance they could be cancelled, and is prepared to delay the MotoGP start for as “far back as” is needed.

“If we can move it back until we've run out of daylight basically, because there are things we can sacrifice.

“There is support races, there is some on track activity, some demonstrations, things like that are the first things to be sacrificed. So we'll close the schedule up and take away the less important things to preserve all three races.

“If it gets to the point where one race can't be run, it'll be the last race. We will reschedule and we've done it before, where we will try and get all the races run and we'll move it back as far as we have to.”