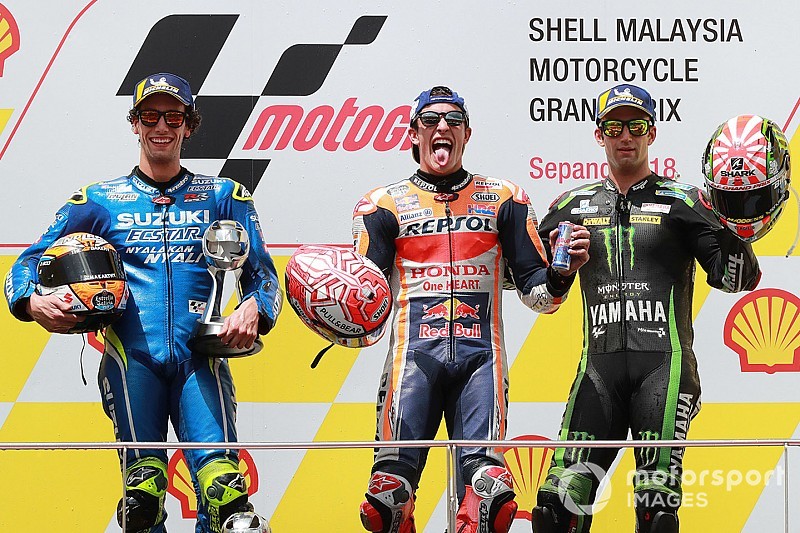 From second on the grid, Rossi outdragged poleman Johann Zarco to take the lead into the first corner, and from there proceeded to build a lead of more than one second.

Marquez meanwhile quickly set about making up for his six-place grid penalty for impeding Andrea Iannone in qualifying and by the end of the fifth lap of 20 he had taken up station behind Rossi.

Initially, Rossi was able to extend the gap over his former arch-rival, but as the race moved into its second half Marquez began to chip away at the Yamaha rider's advantage.

Closing in at around a tenth per lap, Marquez had managed to get within 0.6 seconds of Rossi when the Italian rider suffered a low-speed crash at Turn 1 on lap 17, denying onlookers a repeat of the pair's infamous 2015 Sepang duel.

Marquez inherited a lead of four seconds over Zarco as a result of Rossi's demise, and from there he was able to cruise to a straightforward 1.8s win and clinch the constructors' title for Honda.

Zarco was passed for second by the Suzuki of Alex Rins on the final lap at Turn 4, allowing Rins to equal his career-best result, while Zarco held on for third to claim his first podium finish since May.

Maverick Vinales could well have contended for victory but for his poor grid slot of 11th, which left him losing time stuck behind the Nieto Ducati of Alvaro Bautista in the early laps.

He made steady progress in the second half of the race, passing the second Honda of Dani Pedrosa on lap 14 to take fifth - which would become fourth when teammate Rossi crashed.

Pedrosa's fifth place equals his best result of a difficult 2018 season, while Andrea Dovizioso endured a low-key run to sixth on the best of the Ducatis.

Dovizioso, winner of the last two MotoGP races at Sepang, had climbed as high as fourth in the early exchanges only to drop behind Rins, Pedrosa and Vinales as the race went on.

Sixth was still enough to confirm Dovizioso as the runner-up in the standings with Rossi failing to score.

Bautista led home a trio of satellite Ducati riders in seventh ahead of Pramac pair Jack Miller, whose gamble on a medium rear tyre didn't pay off, and Danilo Petrucci.

Hafizh Syahrin (Tech 3) stormed from 23rd and last on the grid to 12th on the opening lap, and managed to secure the final top 10 position on a day he became the first Malaysian to start a premier class grand prix.

Among the other crashers were Andrea Iannone, who lost the front end of his Suzuki on lap one at Turn 15 while following Marquez, and Jorge Lorenzo's Ducati replacement Michele Pirro.

Sepang MotoGP - the race as it happened

Marquez "didn't have anything more" in Rossi fight