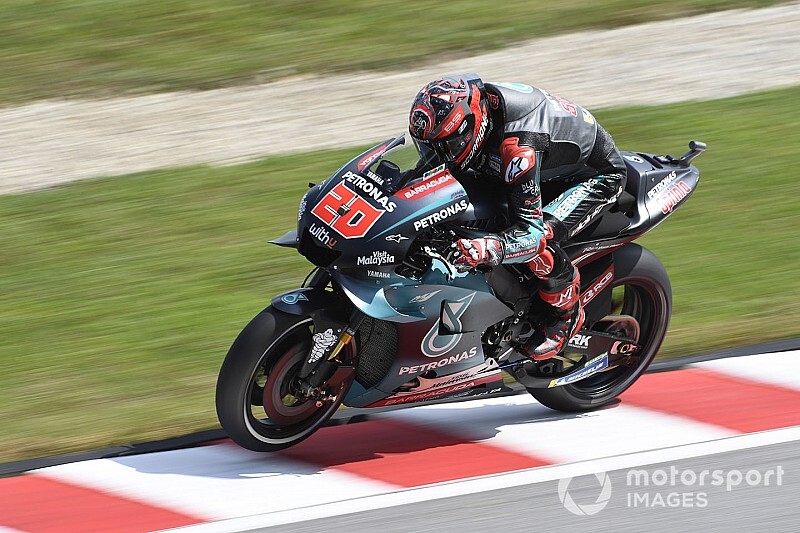 Fabio Quartararo set the fastest-ever MotoGP race weekend lap of the Sepang circuit with a 1m59.027s in Free Practice 1 for the Malaysian Grand Prix.

The Frenchman won out of a Petronas Yamaha shootout in the closing stages of the 45-minute session, pipping Franco Morbidelli by 0.083s.

The tiny margin was enough to leave Quartararo on the right side of the lap record, his 1m59.027s a new race weekend benchmark at the Sepang circuit.

Quartararo's final lap was a fine response to his teammate, who had knocked him off top spot moments earlier with a 1m59.110s.

Maverick Vinales was third best of a flourish of late improvements, making it a Yamaha top three with a 1m59.218s on his final lap.

The Spaniard led the way for the majority of the session, going quickest early with a 2m00.373s, before dipping under the two-minute barrier with a 1m59.955s at the 20-minute mark.

It wasn't until the late rush that his time was overhauled.

Marc Marquez finished up fourth quickest, the recently-crowned World Champion provided the majority of the highlights from a straightforward session.

It started with a low-side near-miss at Turn 2 on his opening run, before his Honda rolled to a stop 12 minutes in, the recovery involving a detour through the back of the paddock.

It was another tough session for Jorge Lorenzo, who ended up way down in 18th, 2.4s off the pace and two spots behind Johann Zarco.

Miguel Oliveira's ongoing participation has been left in serious doubt after FP1, the wrist injuries from his Phillip Island crash flaring up during the session.

He only completed four laps, the best of which was more than 6s off the pace, and exited the Tech 3 garage with more than a quarter of an hour to go.

Quartararo to race factory-spec Yamaha in 2020