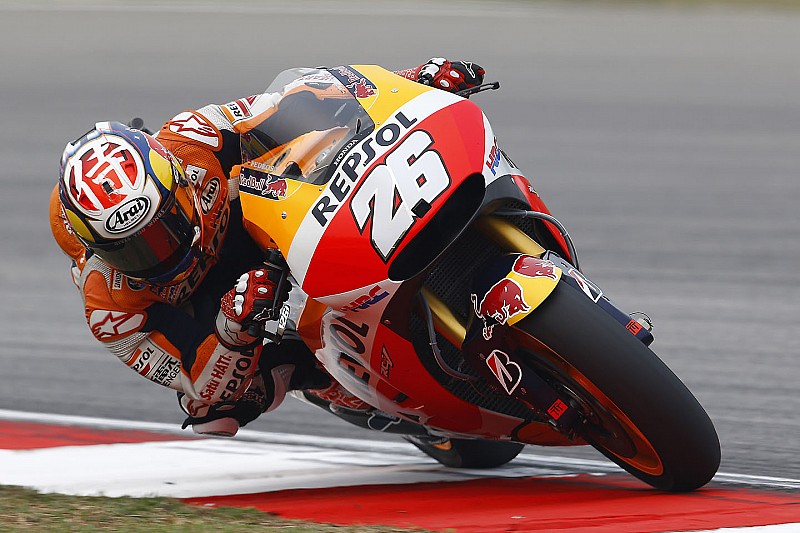 Dani Pedrosa smashed the lap record to take pole position for the Malaysian Grand Prix, while Valentino Rossi edged out title rival Jorge Lorenzo to seal a spot on the front row.

Pedrosa's blistering pole time of 1m59.053s came during the first runs at a hazy Sepang circuit, his 1m59.053s putting him a full six tenths clear of Honda teammate Marc Marquez.

And that would be it as far as the battle for pole position was concerned, Marquez suffering a severe wobble at Turn 12 during his second run that forced him to abort his lap.

The reigning champion made a modest improvement on his third and final run, but came up 0.409s short - giving Pedrosa his first MotoGP pole since Catalunya last year and the 28th of his premier class career.

The real intrigue of the session, however, was in the battle between title protagonists Rossi and Lorenzo.

The latter held a decisive advantage after the first runs, benefitting from Marquez's tow to set the third quickest time, a tenth behind his compatriot, as Rossi languished over a second off the pace despite picking up a tow from Andrea Iannone's Ducati.

But on his final run, this time with no tow to assist him, Rossi pipped Lorenzo by the slender margin of 0.011s to demote his Yamaha teammate to fourth - the first time he has outqualified Lorenzo since June's Assen round and only the second time in 2015.

Lorenzo suffered the ignominy of riding towards the parc ferme area for the top three, only to be redirected away and down the pitlane to his garage - the cameras showing the Spaniard cursing under his helmet.

A highly impressive Hector Barbera completed the top 10 on the Avintia Ducati, ahead of Aleix Espargaro - who crashed his Suzuki in the dying stages of Q2 - and Pol Espargaro (Tech 3 Yamaha).