Schwantz: Rossi could retire if Vinales “hands him his ass” 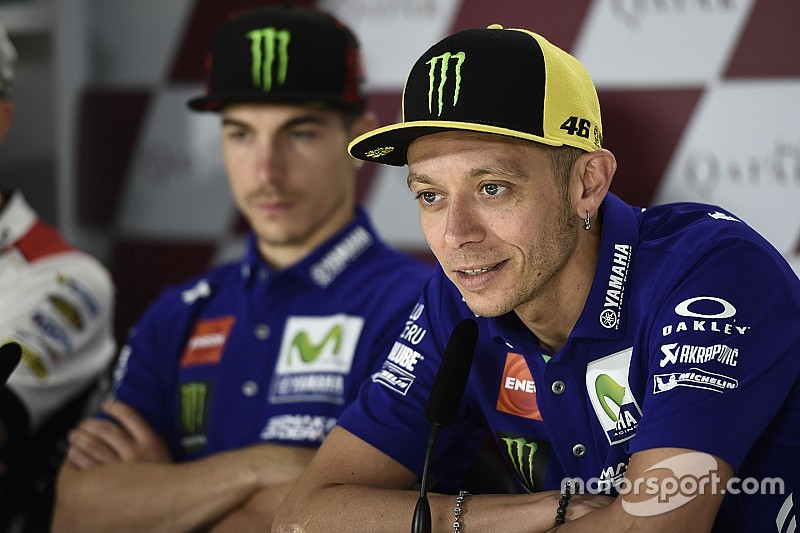 Valentino Rossi could choose to end his MotoGP career at the end of the year if new teammate Maverick Vinales “hands him his ass”, says 500cc legend Kevin Schwantz.

Switching from Suzuki to Yamaha for 2017, Vinales topped all four winter tests, and went on to dominate the opening practice session of the season in Qatar on Thursday evening – going nearly 1.5 seconds quicker than Rossi.

The Italian, who had a subdued pre-season in comparison to his teammate, said he was struggling to feel comfortable on Michelin’s 2017 tyres after placing only ninth in the session.

Rossi signed a fresh two-year contract with Yamaha at the start of the 2016 campaign, meaning he is not due to conclude his career until at least the end of 2018.

However, Schwantz believes that if Rossi consistently lags behind Vinales this season, his plans could change – as he has other career objectives to fulfill outside of MotoGP.

“Rossi is saying he wants to drive Le Mans [the 24 Hours], and do all the other things not yet on his list of accomplishments,” the 1993 500c champion told Motorsport.com.

“He’s kind of preparing himself for it. Do I think he’ll retire at the end of the year if Maverick hands him his ass weekend in, weekend out? He possibly could.

“He’s got other things to keep him occupied, like his Moto3 team, the ranch going on, trying to get in racecars. So he could pretty easily walk away from the sport.

“I’d like to see him hang on another year or two, but it’s hard to sleep at night in those circumstances, thinking, ‘my teammate has two or three tenths a lap on me, every lap.’

“It makes for long weekends and, as competitive as Valentino is, he wants to be in the mix every weekend. If he is not consistently in there for the first half of the season, I think we may see him make his career change.”

Nevertheless, Schwantz predicts Rossi will still finish in the top three of the championship – but tips Vinales to beat current title-holder Marc Marquez to this year’s crown.

“The good thing from [Rossi’s] point of view is that if the Marquez v Vinales battle gets to a stage where they’re taking each other to the ragged edge, falling off, screwing each other around, there could be a place for a ‘Mr. Consistent’ to pick up the pieces.

“He can keep himself in championship contention that way.”

Vinales: If I'm not fighting to win, it would be my fault