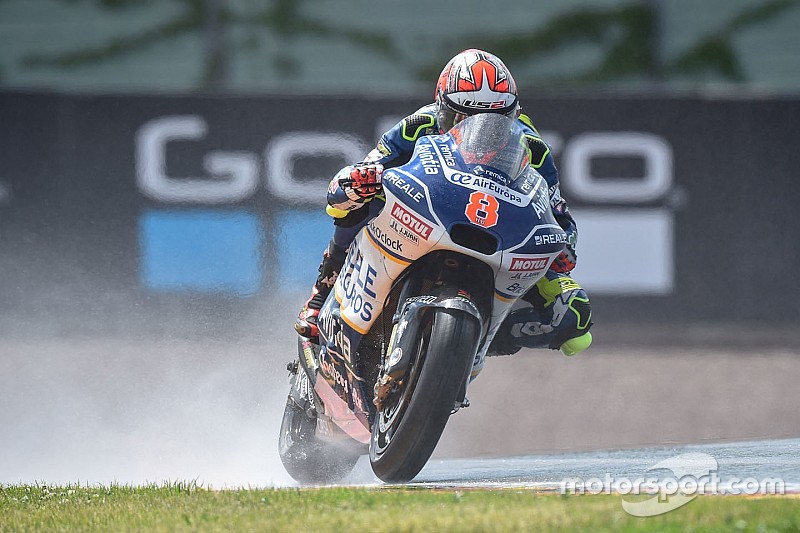 A short shower right before the start of the session forced riders to start the practice on wet tyres.

With the track drying, riders soon started to switch to dry tyres, only to have another period of torrential rain arrive and soak the track again.

Before the arrival of the second shower, Marquez was first with a 1m29.472s, having just demoted Pedrosa, who had led the majority of the session's early stages.

Marquez stayed on top for most of the session, before the track dried up enough to allow improvements in the last 10 minutes.

First it was Danilo Petrucci's Pramac Ducati that took over the lead but Aprilia's Aleix Espargaro and then Andrea Dovizioso demoted him by more than half a second.

Then it was Marquez who moved back ahead with a 1m28.451s, before he went even faster twice more.

He was still leading when the chequered flag fell, but Hector Barbera eventually outpaced him by 0.063s with a best time 1m28.115s.

Marquez settled for second ahead of his Honda teammate Dani Pedrosa, he and Petrucci setting identical laptimes in third.

Aleix Espargaro was fifth ahead of LCR Honda's Cal Crutchlow and championship leader Dovizioso on the best of the works Ducatis.

Jonas Folger took eighth as his Tech 3 Yamaha teammate Johann Zarco was the only rider to crash in the session, falling during the second shower.

Sam Lowes brought a second Aprilia into the top 10 in ninth, ahead of Ducati's Jorge Lorenzo.

The factory Yamaha riders had a low-key session, with Valentino Rossi and Maverick Vinales only 15th and 20th respectively in the rain.

Rossi "in trouble" in both wet and dry at Sachsenring