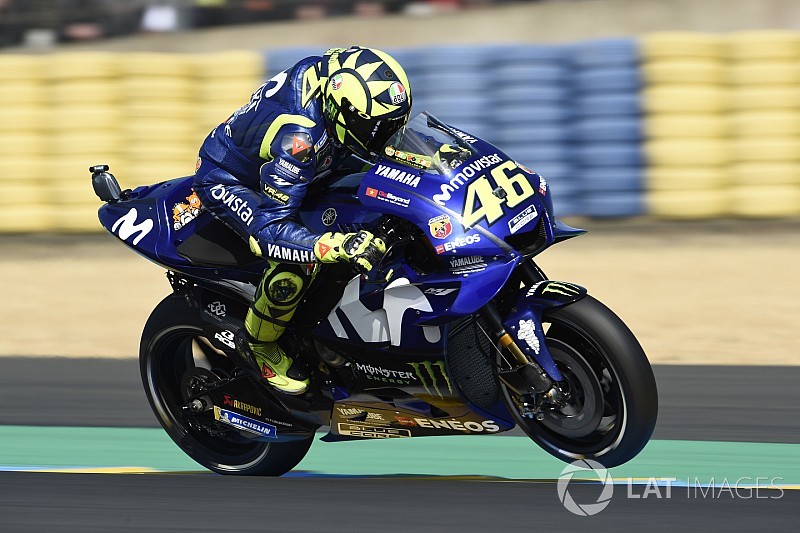 Yamaha MotoGP rider Valentino Rossi says his form in Friday practice at Le Mans allayed his fears after poor showings at Jerez and in private testing at Mugello.

Rossi finished fifth last time out in the Spanish Grand Prix at Jerez, but the result was aided by attrition and followed a weekend in which the Yamaha works bikes struggled badly for grip.

The factory team then took part in a test at Mugello in the week after the race - and Rossi says that running only added to his worries ahead of Le Mans, despite its status as a Yamaha stronghold.

But after ending Friday third overall, a quarter of a second behind the pace-setting Ducati of Andrea Dovizioso, the Italian said the performance was "more positive than what I expected".

"In Jerez I know that we had to suffer, but we make the test in Mugello and also Mugello I was quite slow, so I was very worried, also about Le Mans," Rossi recalled.

"But in this track our bike work very well, and I think that the M1 [bike] like Le Mans for the layout, also this asphalt is very good, have a lot of grip, and also the low temperature - because here today was perfect, sun but is not very hot, so is the perfect condition for us.

"We have a lot less problem also with the used tyre, I have a good rhythm, that is very important for the race. It's just Friday but like this is a lot more fun compared to Jerez."

Rossi said it was not fully clear why Yamaha was so reliably fast at on what "on paper is not a Yamaha track", but reckoned the layout masked the bike's electronics weakness.

"We don't know, difficult to say," he said. "You arrive from Jerez, where you have a lot of problems, and you put the same bike here, and it's okay. So it's the marriage between the bike, the tyre and the track that works.

"In this track, historically, you [wheel]spin less because the corners are more short, and also because the asphalt have more grip.

"When these two things are together, the electronics are less important, so we suffer less."

He said he was satisfied with how the bike was working, but admitted he wasn't feeling as confident as he had at the same event last year.

"For sure I didn't have the confidence [today] I had last year to push because last year I arrive here with really good rhythm, [previous] races, so I arrive for sure with maximum confidence with the bike," said Vinales.

"The bike is working well, this morning I could keep up the race pace that I did last year.

"In the afternoon I try something different on the bike that I already didn't like how was working and we waste a lot of time in the box trying to change those things."

"Overall I think we improve a little bit in Le Mans. Now we have to set up a little bit better the bike for the track because Jerez is still a different track and I think still we have room to improve for tomorrow."