Rossi: Lack of top speed caused me to fade at Phillip Island 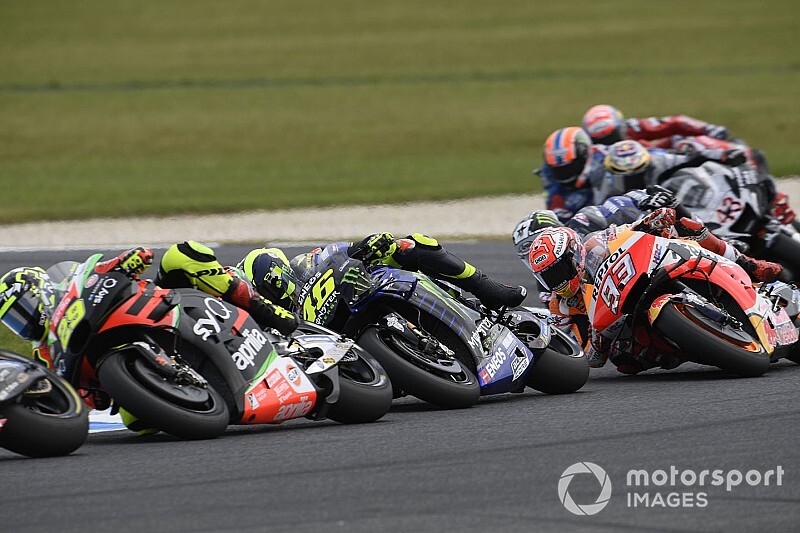 Valentino Rossi said Yamaha's straightline speed deficit cost him a lot during MotoGP's Australian Grand Prix and was a big reason for why he finished only eighth.

Rossi had taken the lead at the start of what was his 400th grand prix appearance, but could only keep first place for three laps before he was overtaken by Cal Crutchlow and several others in quick succession.

The 40-year-old was part of the group fighting for fourth, which became third after Maverick Vinales's last-lap crash, but he was only able to salvage eighth.

While Rossi said that this race was better than Motegi, where he struggled before crashing out, he was severely hindered because "every lap I lost one position in the straight".

"Was a great start, very good way to celebrate my 400th grand prix, to stay a little bit in front," said Rossi. "At the end, for sure, the result is not fantastic but I was not so far from [Jack] Miller, who arrived on the podium.

"I was able to ride in a better way, I was more competitive compared to the last weekend. Anyway, we need more, we need to be stronger.

"The problem is, every lap I lost one position in the straight. We are a big group but if I am not able to resist, or re-overtake during the lap, in the next lap the guy behind overtook me another time because I was for sure slowest in the straight of all the group.

"Unfortunately in some places I was not strong enough every lap to recover. At the end I tried to ride smooth and not lose because I had other bikes behind."

Rossi added that having rear grip problems has been the "theme of the second half of the season" and that he is yet to find a solution to it.

"Here we found a good balance of the bike and in braking and inserting corners I was very well placed with the front," he added.

"But we lacked a bit of grip at the rear, which is the theme of the second half of the season, which for the moment we can't solve. We have to think about this and we have to try to improve".

Crutchlow: 2018 Phillip Island crash "haunted me for a year"