Rossi to start from back at Valencia, keeps points for third 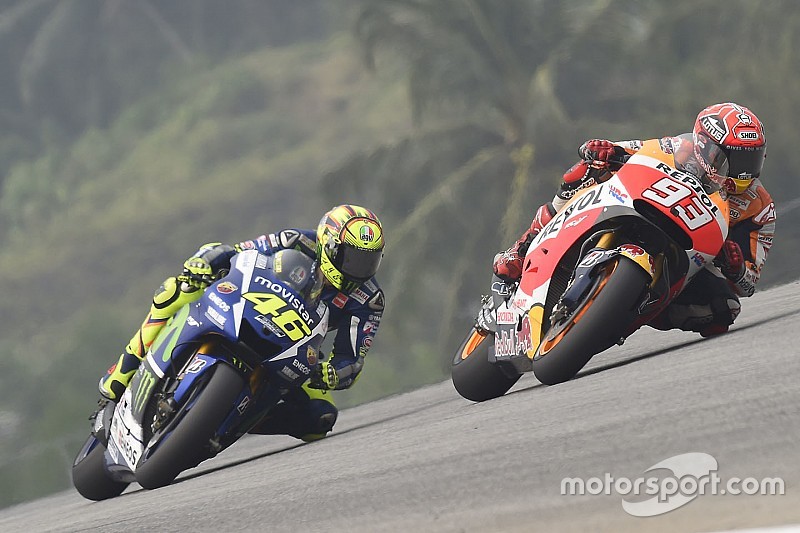 Valentino Rossi will be forced to start from the back of the grid in the MotoGP season finale at Valencia in two weeks' time for his clash with Marc Marquez at Sepang, but will keep his points for finishing third.

After a dogfight with Marquez for third place that spanned several laps, Rossi lunged at the Spaniard into Turn 14 on the seventh lap, braking hard and edging Marquez to the side of the track.

As the pair made contact, Marquez fell, dropping out of the race, while Rossi went on to complete the scheduled distance in third place.

However, after reviewing the clash, the MotoGP stewards allowed Rossi to keep his points for finishing third, ruling only that the Italian must start from the back at Valencia after being handed three penalty points on his licence.

It is understood Honda will appeal the decision, as will the Yamaha team itself.

The incident came in the aftermath of a feud emerging between the duo during the Sepang pre-race proceedings as Rossi accused Marquez of deliberately helping the Italian's title rival Jorge Lorenzo at Phillip Island.

With Lorenzo finishing second to Dani Pedrosa at Sepang, Rossi's championship lead was cut to seven points, meaning he would clinch the title with a second place finish at Valencia.

Lorenzo: Rossi should be given "big penalty" for Marquez clash