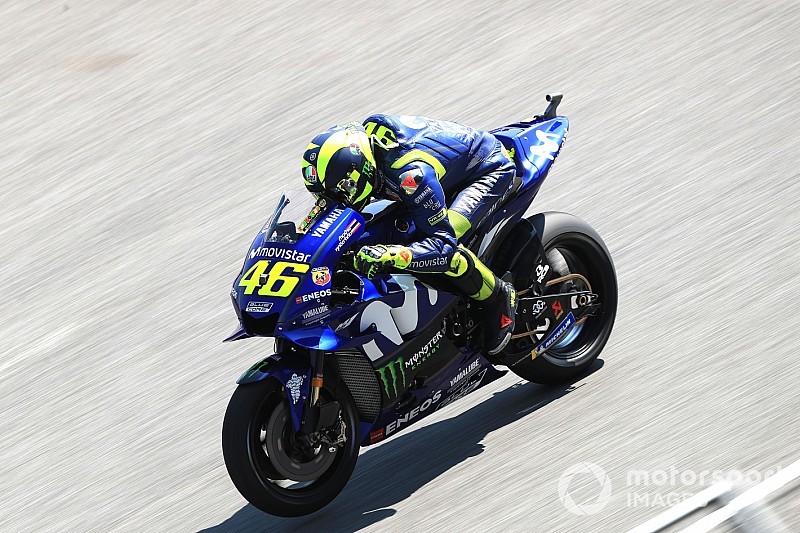 Yamaha MotoGP rider Valentino Rossi and his teammate Maverick Vinales were both surprised by the team's positive opening day for the Thailand Grand Prix.

Vinales and Rossi were first and second in FP1 and the former was only beaten by Ducati's Andrea Dovizioso in the afternoon session.

While Rossi reckons the 1-2 in FP1 was not reflective of the real competitive picture, he said Yamaha has improved since the last race at Aragon even though Buriram is a track that in theory shouldn't suit the M1.

However he was unable to give a reason for the sudden upturn in form.

"Aragon was a disaster because we didn't have any grip, here on paper we have to suffer but today less than what we expect, so we are a bit more competitive," said Rossi, who ended FP2 in ninth.

"We go in the track and looks like the track has more grip so you can push more. Aragon was very difficult. But why [are we better here]? The problem is that we don't know. Also Yamaha don't know.

"This morning FP1 was fantastic because we were first and second but also because a lot of top riders don't put the new tyre.

"This is not the reality but anyway we can stay in the top 10 for try to go directly in the Q2 and try to make better race compared to Aragon, better result.

"The situation is a bit difficult because at the end the bike is the same, but today we suffer less, sure, is better.

"For some reason we have a lot of difference between the good tracks and the bad tracks. Is like we suffer more than the other bikes, the other bikes are more balanced, always the same.

Vinales said that Friday was a "surprise", praising the team's work during the day, and added the changes made to the bike will be important for 2019 as well.

"Well, actually a surprise, but anyway we try some things that we should have tried many months ago.

"The work, it's been done well. I'm actually happy, as I said, sometimes the work wasn't good, today was good, was really good.

"We did a good work from FP1 to FP2, good changes and I can ride very precise.

"It is important, this test, also for 2019 and I am actually happy and pleased with the result of today and let's see tomorrow."