Rossi rode "like when I was young" in Argentina race 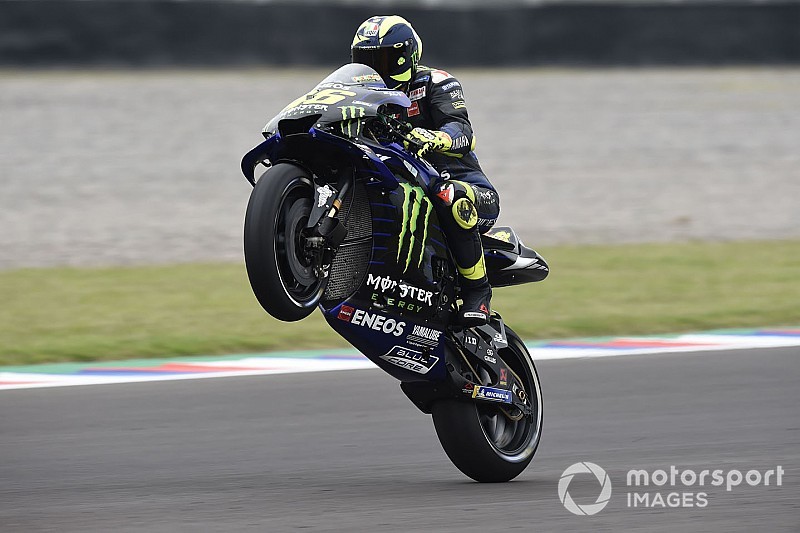 An overjoyed Valentino Rossi said he was riding "like when I was young" in MotoGP's Argentine Grand Prix, in which he stole second from Andrea Dovizioso on the last lap.

With Marc Marquez rapidly pulling away and taking a dominant win, Dovizioso and Rossi were left fighting for second at Termas de Rio Hondo.

Dovizioso held the spot for most of the race, but was never able to shake off Rossi, who put pressure on the Ducati rider as the grand prix entered its final stretch.

Rossi left it until Turn 7 on the last lap to make his move, and Dovizioso couldn't respond, allowing the Yamaha man to secure first podium since last year's Sachsenring race in July.

"I am very happy for me, for my team and for Yamaha because was a long time that I don't arrive on the podium, with the two mistakes at the end of last year," Rossi said.

"I am very happy, we needed this result. We work very well since Friday, I ride like when I was young, I enjoy very much.

"The race was good, I expect to have a bit more pace than Dovi, but no, so I stay behind but at the end I have two or three point where I was a bit faster than him.

"I try on the last lap and was good. Dovi is not able to do his famous cross [cutback move]."

Dovizioso "not happy" to lose second

While Dovizioso was pleased to accomplish his initial goal of getting a podium finish in Argentina, he said he was "not happy" to lose second place.

"Happy for the podium, because when we came here it was our target," said Dovizioso.

"But I am not happy in the way the tyre work during the race and I had to stay in front to manage the tyres.

"At the end Valentino was able to study me. I couldn't stay behind because I was struggling, maybe it wasn't the best strategy.