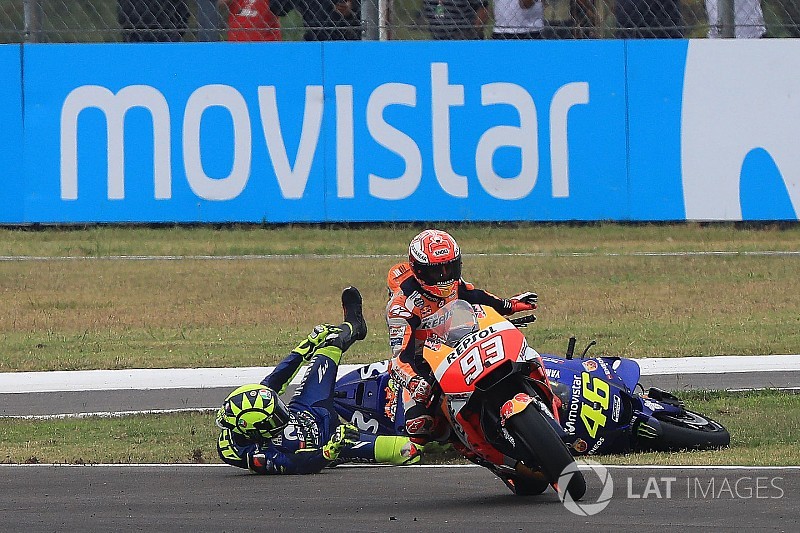 Marquez and Rossi came to blows late in the Termas de Rio Hondo race amid a charging recovery ride for the reigning champion, who had to serve a ride-through penalty after retaking his grid slot having stalled.

While battling for sixth place, Marquez made an aggressive move at Turn 13, forcing Rossi on the damp part of the circuit and running him out on the grass, where the Italian crashed.

Honda rider Marquez went on to finish fifth, but was demoted to 18th with a 30-second time penalty for “irresponsible riding”, while Rossi remounted his Yamaha to finish 19th.

It followed a similarly bold move by Marquez on Aprilia rider Aleix Espargaro earlier in the race, shortly after Marquez rejoined the track having served his initial penalty.

“As a team we cannot accept these kinds of actions by Marquez,” Jarvis told Sky Italia.

“What he did twice during the race is unacceptable – first with Aleix Espargaro, and then with Valentino, who also risked getting hurt and losing a lot of points.

“We went to race direction to make clear our position and Valentino came with us to express his opinion directly. Now we have to wait on Race Direction and the FIM.

“They have to decide if they can do something more, because they already gave him a 30-second penalty in the race.

“Valentino has said that Marquez is very dangerous and is scared of being near Marquez on track. This is something that needs to be resolved in future, not only for us but for MotoGP in general.”

After the race, Marquez was seen heading to the Yamaha pitbox in an ostensible bid to apologise to Rossi, but was rebuffed by the Italian’s right-hand man, Uccio Salucci.

“At the moment I’m not interested in talking to Honda or Marquez,” Jarvis added. “He tried to come into our box, but it was not the time to do it.”