Rossi: Marquez was out to help Lorenzo at Phillip Island 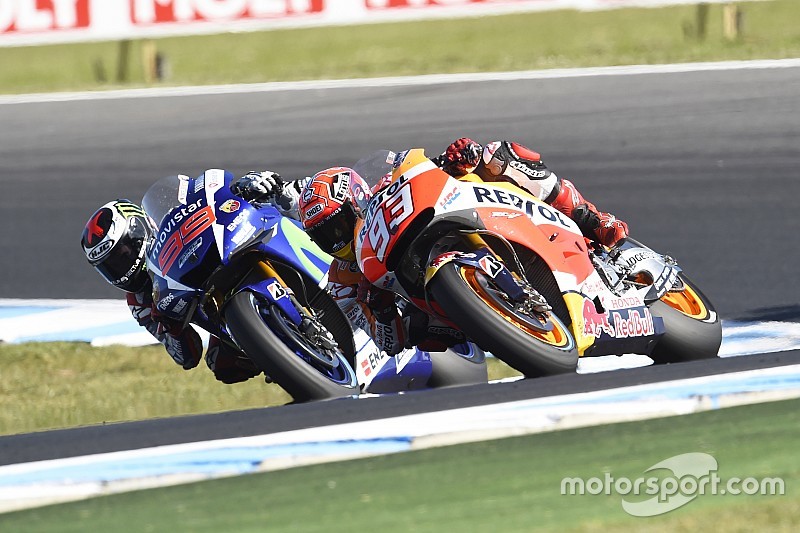 Marquez took honours in Australia last weekend after an epic scrap that featured 52 overtaking moves among the top four, the last of which saw Marquez pass Lorenzo for the lead at MG corner on the very last lap.

But having reviewed the race, Rossi said he believed the Honda rider could have won easily had he pushed throughout, but instead chose to vary his pace to allow Lorenzo a better chance of escaping out front.

“If we see another race like this, we have to speak with Marquez, because afterwards I see very clearly that he played with us,” said Rossi.

“I think his target is not just to win the race, but also help Lorenzo to go far and try to take more points from me.

“From Phillip Island it’s clear Lorenzo has a new supporter, which changes [things] a lot because Marc has the potential to go away alone and it can be another type of race.”

Marquez nonetheless brushed off Rossi's accusations, remaining adamant that his only concern was winning the race, and that he would only consider helping another rider on track if it was his teammate.

Explaining in more detail his mid-race drop-off in pace, he added: “Honda is pushing a lot the front tyre and at this race it was the softest compound; it was the only tyre we could race and I was struggling a lot.

“It’s true that I tried to manage the tyre, but I also tried to open a gap in the middle of the race and it was not possible.

“I did the best race for myself and my team, and most important is that I won. I would only help if it was my teammate; otherwise I push for victory.”

Lorenzo also dismissed any notion of receiving help from Marquez – when asked if it was the case, he quipped: “Yeah, mainly on the last lap!”