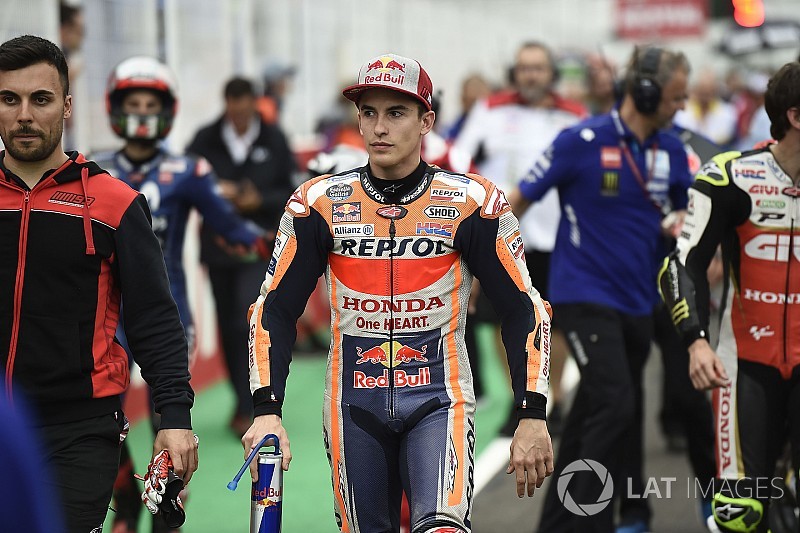 Valentino Rossi says Marc Marquez's attempt to apologise after their clash in the Argentina MotoGP race was “a joke” made for the sake of PR.

Marquez speared Rossi off the track at the Turn 13 right-hander while battling for sixth place late in the race – with Rossi crashing on the wet grass and Marquez subsequently assessed a 30-second penalty.

The reigning champion slowed and gestured towards Rossi immediately following the crash, and after the race he was seen walking down the pitlane to Yamaha's garage to talk to the Italian – but was turned away by Rossi's right-hand man Uccio Salucci.

Asked about Marquez visiting his garage, Rossi said: “It is a joke, it is PR.

“First of all, he doesn't have the balls to come to my office alone but he come like always with his manager [Emilio Alzamora], with Honda, in front of all the cameras.

“I don't want to speak with him, because I know that it is not true what he says to me.”

Pressed on whether he'd accept Marquez's apology if the Spaniard came up to him, Rossi said: “No, he don't come. He don't come.

“I hope that he is clever enough that he don't come.”

Team boss Alberto Puig, who was among the three Honda employees to follow Marquez and Alzamora to Rossi's garage, said it was the rider's idea to try to apologise.

“After the race, when Marc come to the pit, the first thing he said, by himself, was that he wanted to apologise, just to explain,” Puig said. “It was Marc's decision to go there. It says a lot about the rider.

“We went there, of course, and they were not happy, and they asked us to leave - which I can understand, believe me, because if this happens to your rider, you are not happy.

“But once again, this is racing, and what more can we do? We went to apologise, we feel sorry - but if they don't want to, there's nothing more we can do.

“And I think there's no more meaning to keep talking about it.”

While Puig stressed that he trusted Marquez's explanation and felt the clash was “a racing incident”, he hoped Rossi and Yamaha will eventually “understand” their rivals' point of view.

He said: “We just hope that they can understand and accept our apology - for something that we believe it was not a real mistake of the rider, but of course the consequence was that Valentino crashed, this we understand.”