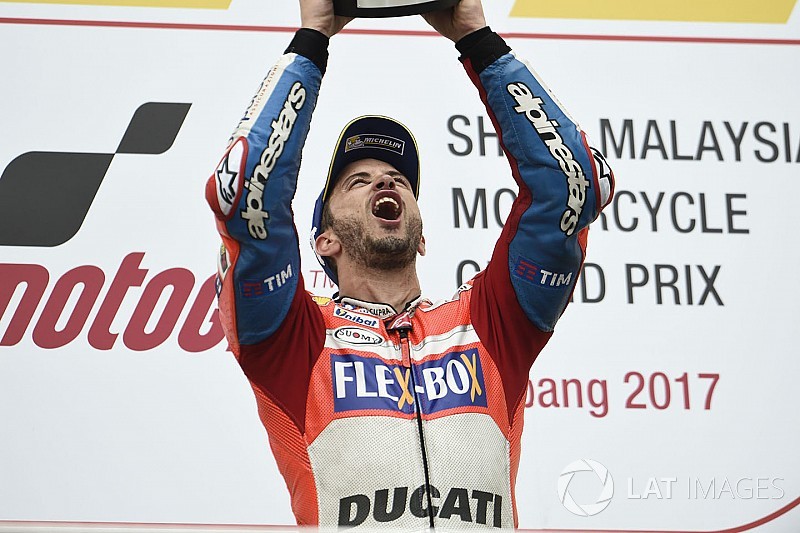 Valentino Rossi says that MotoGP veteran Andrea Dovizioso's title challenge in 2017 shows that young riders should be given more time to start performing.

Dovizioso made his MotoGP debut in 2008, and despite having spent all bar two of his seasons on either factory Honda or Ducati machinery, this season marked the first time he was involved in the title fight.

He quadrupled his career tally of MotoGP wins by taking six victories, and was the only rider to stay in contention with champion Marc Marquez until the final race.

Rossi said Dovizioso's season "is a very good story" because of the difficulties he faced throughout his career, and that young talents sometimes don't get the time they need to start performing.

"For me, the story of Dovizioso is a very good story because he passed through difficult periods in his career, especially in MotoGP," said Rossi.

"Everybody has to learn from him because he never gave up but especially he never lost the faith, he had self-belief.

"He won two races in nine years and six races in one year. To do like this, we have to be strong, balanced.

"We try to help our guys, we try to work to improve every time. For sure you are in a hurry, yes, but everybody needs time.

"It is like this, not just in MotoGP, not just in our sport. In every sport, everybody wants the result straight away. The time is running away, you never have time."

"Not everybody is a Marquez" - Luthi

Thomas Luthi will step up to MotoGP with the Marc VDS Honda team next year at the age of 31, having spent no fewer than 16 years in the 125cc and 250cc/Moto2 classes.

The Swiss rider believes there has been a shift in attitude among team owners recently and that they have come to realise expecting every rider to perform like Marquez is unrealistic.

"There was a time, it was incredible, everybody was asking for 20-year-old guys, it was Marquez, [Jack] Miller and guys like that, they were very young," Luthi explained.

"I think many people understand now that not everybody is a Marquez, and some guys maybe need a little bit longer to learn things.

"It was quite tough for me because, a 31-year-old, way too old, no chance anymore. It is also very good to see that [38-year-old] Rossi is there and wins races. That helps for sure."

Kallio disappointed to miss out on full-time KTM ride

Baz: I proved tall riders can succeed in MotoGP