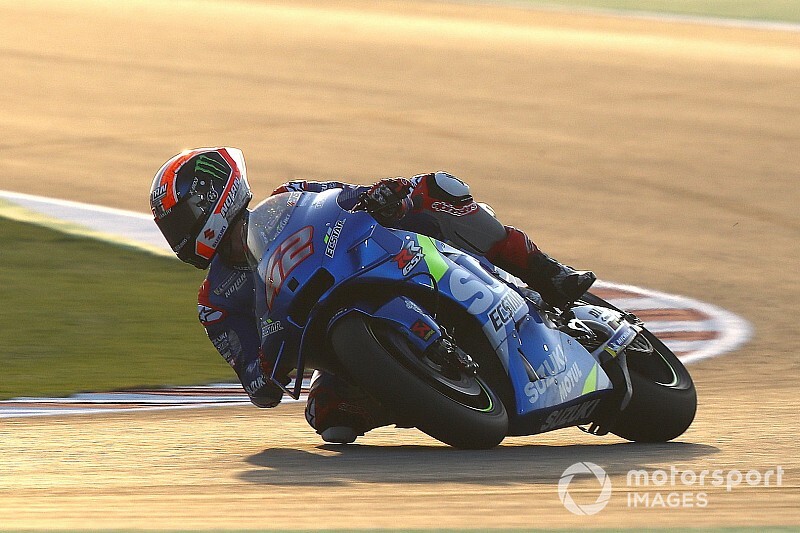 Alex Rins led a Suzuki 1-2 on the first day of the final MotoGP pre-season test in Qatar, while Honda rookie Alex Marquez crashed twice during the session.

With just three more days of testing stand between now and the first race of the season in Qatar in a fortnight, riders took to the Losail International Circuit on Saturday for seven hours of running.

Due to early afternoon conditions being unrepresentative for the Qatar race weekend, there was no action for the first hour, while only KTM rookies Iker Lecuona (Tech 3) and Brad Binder entered the track early into the second hour.

Ducati’s Danilo Petrucci followed them onto the circuit not long afterwards, and briefly took over top spot with a 1m59.166s.

By the third hour, six riders had set a lap, with Alex Marquez the fastest on a 1m57.863s before suffering a small crash at the Turn 7 right-hander.

Aprilia’s Aleix Espargaro led the way at the end of hour three with a 1m56.079s, as he and the Italian marque focussed most of their efforts on improving the RS-GP’s reliability after encountering a few issues at Sepang despite a strong debut for the new bike.

Sepang test pace-setter Fabio Quartararo took over top spot with a 1m56.025s not long into the fourth hour, though was soon deposed by the sister works Ducati of Andrea Dovizioso.

Dovizioso’s 1m55.557s remained the benchmark for around 30 minutes before he improved to a 1m55.478s on a bike which appears to be testing Ducati’s adjustable ride height system – which is an evolution of the ‘holeshot’ start device it raced last year.

Pramac’s Jack Miller was also testing the device, which he is using to lower the rear of the bike exiting corners onto straights and which he is thought to have raced in last year’s Malaysian Grand Prix.

Maverick Vinales, who had the standard holeshot device Yamaha introduced at the Sepang test on both of his M1s, set the pace with just over three hours to go with a 1m55.388s.

Yamaha claims it doesn’t have any new parts in Qatar, and is focusing on refining what it tested at Sepang ahead of the first race of the year.

Vinales would return to top spot later in the session with a 1m54.494s, before Joan Mir moved his Suzuki ahead by 0.030 seconds with just over 30 minutes remaining.

Mir looked set to end the day first, but teammate Rins fired in a 1m54.462s late on to steal the position as both Suzuki riders followed in a similar vein to Yamaha and focused on refining what they tested at Sepang.

Vinales completed the top three from Petrucci, while Franco Morbidelli rounded out the top five on the ‘A-spec’ Petronas SRT Yamaha.

Reigning world champion Marc Marquez led the session briefly in the latter half, and ended up sixth with a 1m54.823s as the Honda rider continues his recovery from shoulder surgery in the winter.

Dovizioso suffered a fall at Turn 8 late on and ended the day 0.898s off the pace in 11th ahead of Avintia Ducati’s Johann Zarco.

Pol Espargaro was top KTM runner in 14th, with teammate Binder top rookie in 16th. Alex Marquez crashed for a second time halfway through the session and was 21st on the timesheets as a result.