Rins "sorry" for holding up Petrucci in Rossi battle 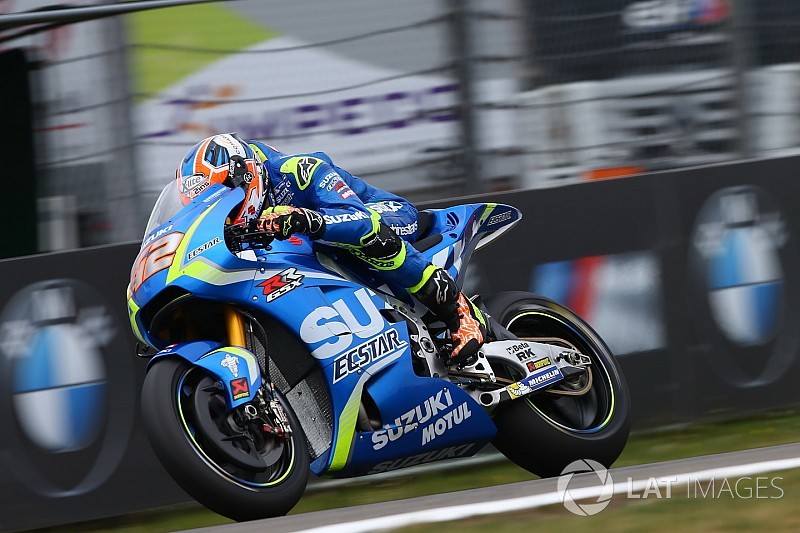 Suzuki rider Alex Rins has apologised for holding up Danilo Petrucci on the final lap of the Dutch TT during the Italian’s victory battle with Valentino Rossi.

Pramac Ducati rider Petrucci lost valuable time behind both Rins and the Avintia Ducati of Hector Barbera in the closing stages of his fight with Rossi at Assen, going on to lose out a potential first MotoGP win by only 0.063 seconds.

It left Petrucci feeling “quite angry” afterwards, as he felt the hold-ups cost him a shot of beating his Yamaha rival.

“During the last few laps I saw it was only me and Vale [for the win],” said Petrucci.

"I was a little bit faster, and had more acceleration through the fast corners in the last sector, and I was preparing the attack for the last laps.

"But I found Barbera on the penultimate lap, in the last chicane, no blue flags. And then Rins at Turn 6 on the last lap. I lost [touch with] Valentino.”

After the race, Rins admitted he was at fault, saying he didn’t see any blue flags to warn him of the leaders approaching at the fast Ruskenhoek right-hander.

“I did a small mistake with Petrucci on the last lap, I didn’t see the blue flags,” said the Suzuki rider.

“I was on the [racing] line, I was trying to open a bit the line, but I don’t expect him behind me. I am sorry for this action.”

No wrist problems on return

Assen marked Rins’ first race back from injury, the Spaniard having missed the previous four rounds at Jerez, Le Mans, Mugello and Barcelona after breaking his left wrist in a crash at Austin.

He finished in 17th place, having chosen to pit for his second bike when light rain began to fall in the latter stages, but was satisfied with his performance up to that point, reporting no issues with his wrist.

“I passed the first lap in last position, but later I was trying to overtake step by step the other riders, and finally before it started to rain I was in 14th position, so this is really positive for me,” said Rins.

“When I changed the tyres, it was a bit of a disaster. I was thinking it was two laps raining, so maybe it happens the same as the warm-up [when it rained heavily unexpectedly].

“Anyway, now we think of the next races. I feel good on the bike, with my hand I don’t feel any problems.”

Iannone just needs to "get on with the job", says Schwantz