Analysis: Can Marquez steal a win in "Ducati's land"? 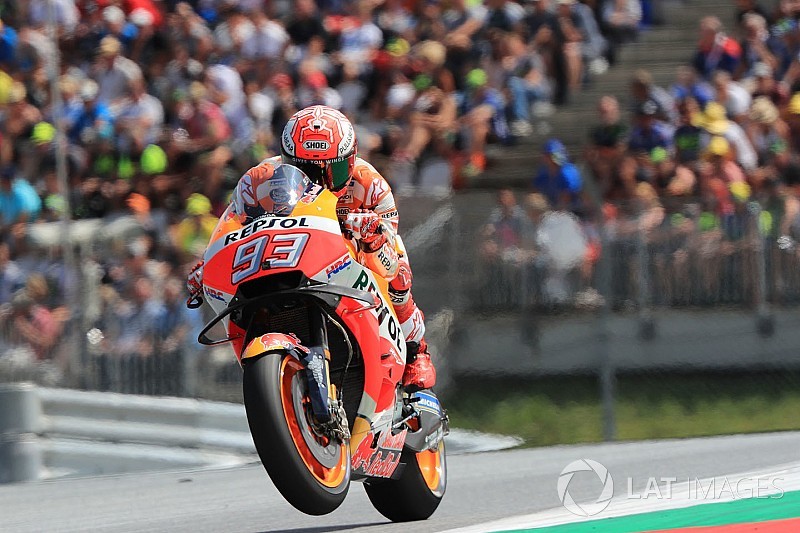 Marc Marquez may have defied expectations by taking pole in Austria, but can the reigning champion convert that into victory at Ducati's strongest track on the MotoGP calendar?

If there's one grand prix weekend all year which Ducati would ask to be as straightforward as possible, it's probably this one, the Austrian Grand Prix.

Wins for Andrea Iannone and Andrea Dovizioso since the event's return have come as no surprise, given the Red Bull Ring is the archetypical Desmosedici circuit – stop-start, with straights for days leading to hard braking zones.

Well, if Ducati did wish for a straightforward weekend here in 2018, the wish wasn't granted. After the Italian manufacturer dominated FP1, the two next practice sessions took place in wet-to-mixed conditions – while FP4 began on a recently-dried surface still lacking grip.

Now, the bit that counts for the championship – the 28 laps on Sunday – is anticipated to be dry, which probably came as welcome news for Ducati as the team watched Marc Marquez set field-blitzing pace in wet and mixed conditions.

Then again, as Marquez's pole position heroics in­ a fully dry qualifying suggest, this will almost certainly not be an easy race for Ducati whatever the weather.

“Tomorrow we w­ill try to fight in Ducati's land, try to be competitive and fight against them,” the reigning champion has vowed. 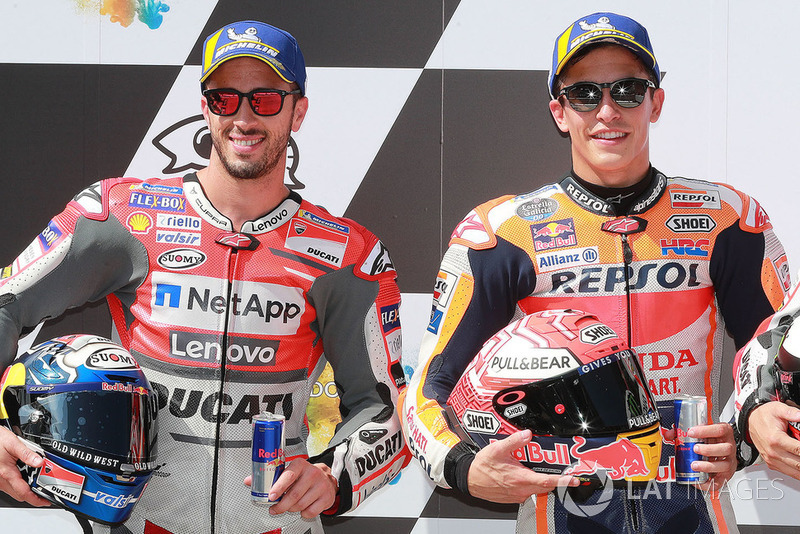 It was Ducati, and in particular Dovizioso, that made the stronger start to the weekend in the first Friday practice.

After acclimatising himself and the bike to the track in the opening run, Dovizioso lowered his laptimes to the low-1m24s range, running slightly faster than Marquez on tyres that had done about half the race distance.

But while the Italian then fired in a quick lap on fresh tyres to close out the session, Marquez continued to run same medium front and medium rear – and his pace after 20 laps was no worse than it had been at the very start, as he logged a pair of 1m24.4s laps.

“In FP1 in the last run we did a change on the bike that helped me a lot,” Marquez said after qualifying.

“I cannot say what we tried in the last run, but was one of the new things that we get in Brno. So we start with our current base, like we use all year, but then on that last run we introduced something that we tried in Brno and was working well, and here it's working good, too.”

The change left him in good stead for the other proper dry practice, FP4, where Marquez got down to a 1m24.1s on a decently worn medium – soft combination, and remained in the mid-1m24.5s approaching the end of the race distance.

His final lap in the session was faster than all but two laps of Dovizioso's run on a fresh hard-soft combination – but this was in lower-grip conditions. The Ducati rider got closer as the track improved, and hence came within just 0.002s of Marquez's pole time.

“In FP4, the condition was strange, maybe with a lot of water, there wasn't maybe the rubber on the asphalt and I didn't feel so good," said Dovizioso.

“Lap by lap we put a lot of rubber on the ground, and I think the track was a bit faster in qualifying, with a bit better grip. So I think that gave me a better speed.”

Assuming the weather is as predicted, the track will be grippy and Dovizioso's pace should be back to FP1 standards, making him and Marquez the men to beat.

Dovizioso expects teammate Jorge Lorenzo to feature as well: “I think we are the riders, we can fight for the victory and the podium, but we are very different, so everything can happen during the race.”

But Lorenzo's pace was at least a couple of tenths, if not more, off his teammate's level on Friday, and while he was closer in FP4 (with sector three and its two sweeping left-handers accounting for much of his gain), he also did very little used-tyre running compared to his two main rivals. 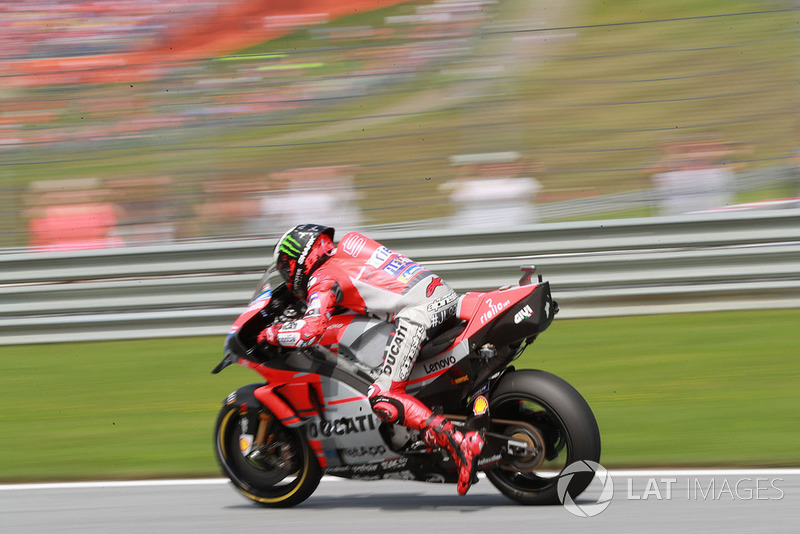 Should any of the top three drop out, Danilo Petrucci would be best-placed to pick up the pieces, having been closer to pole than to fifth-placed Cal Crutchlow in qualifying.

Petrucci, however, is concerned that he will have a “bigger problem” managing fuel and tyres than his rivals.

And indeed, despite his qualifying gap, there is very little difference between the FP4 mid-race pace produced by him, Crutchlow, the second Honda works bike of Dani Pedrosa, the Suzuki of Andrea Iannone and the Tech 3 Yamaha of Johann Zarco, all of them seemingly oscillating in the high-1m24s to low-1m25s range.

Crutchlow, however, is convinced the chasing pack could yet trouble the top three, “especially because they'll have a big battle”.

The Briton added: “Marc has the superior pace, but the Ducati, I don't think they will have to push anywhere near as hard as Marc, and they will just gain two tenths every lap, just stay there, in the [slip]stream.”

A rider who's worth looking out for as a dark horse contender is Avintia Ducati's Tito Rabat, who starts seventh and was excellent in FP4, metronomically rattling out laptimes between 1m24.9s and 1m25.2s on worn tyres over almost 10 laps.

On the other hand, two bikes that really should be in that best-of-the-rest picture but aren't are the two works Yamahas.

Maverick Vinales and Valentino Rossi will not only be hampered by starting 11th and 14th but also simply don't have the pace, with Rossi looking three to four tenths adrift of the potential second pack and Vinales another tenth or two behind that. 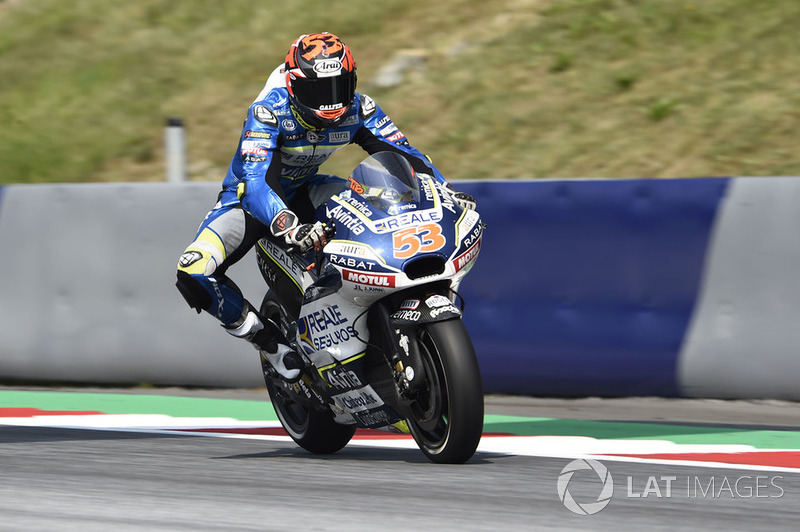 The competitive picture out front could, and probably will, still change in the warm-up, which given the dearth of dry running this weekend so far will be even more important than normal.

As it stands, however, Marquez stands with a very good chance of ending Ducati's nascent Austrian GP streak.

This won't come as a huge shock given that he challenged Dovizioso for victory at the final corner last year, but Marquez himself admitted on Saturday that he didn't really “believe” his chances then.

This Sunday might be different. At the same time, as he readily admits, Marquez's points lead means this is a race he can very much afford to lose.

Luthi to return to Moto2 after single MotoGP season