© 2021 Motorsport Network. All rights reserved.
TV Buy tickets Store
Previous / MotoGP on TV today – How can I watch qualifying for the Austrian GP? Next / Dovizioso will not stay at Ducati in 2021
MotoGP / Austrian GP / Practice report

Maverick Vinales topped a mixed-conditions third practice for the MotoGP Austrian Grand Prix to bag a Q2 place in qualifying, while teammate Valentino Rossi missed out. 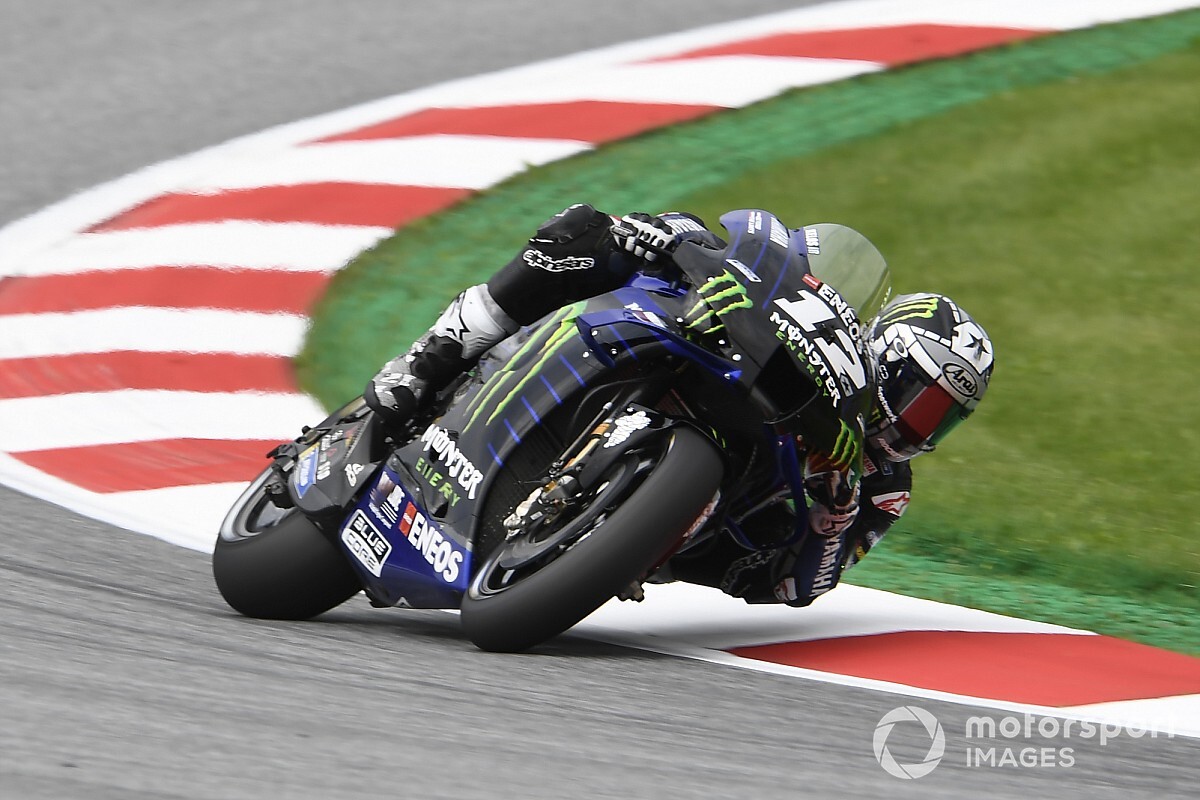 Heavy overnight rain left the Red Bull Ring damp for the start of FP3, though a drying line was appearing as bikes took to the track for the 45-minute session.

Oliveira’s lap of 1m31.460s set 15 minutes in stood as the benchmark for around 10 minutes, before Johann Zarco guided his Avintia Ducati to top sport with a 1m31.029s.

As Zarco set that lap, several riders had fitted slicks to their machines and were beginning to light up the timing screens.

The reigning Moto2 world champion improved to a 1m28.576s, before Dovizioso assumed control of the timesheets with a 1m27.380s.

KTM’s Pol Espargaro took over top spot briefly, but Dovizioso usurped this with a 1m24.832s – a laptime just a tenth outside of the pace needed to make an improvement on the combined times.

Vinales proved there was potential to improve on the combined times in the closing stages, jumping up to seventh overall with a 1m25.715s to move into the Q2 places.

A 1m24.317s would put Vinales top of the FP3 timesheet and third overall to cement his place in Q2, though KTM’s Espargaro remained fastest on the combined times by virtue of his FP1 lap.

Dovizioso was third in the session and second overall, with Jack Miller fourth on combined times on his Pramac Ducati after ending FP3 second.

Oliveira was fifth in FP3 with a 1m24.508s which bagged him a Q2 place along with Joan Mir (Suzuki), seventh-placed Espargaro and Fabio Quartararo – who fired in a 1m24.611s at the death to edge Zarco by 0.044s in on the combined times in 10th to grab the last Q2 place.

The top 10 in FP3 was completed by Danilo Petrucci (Ducati) and LCR Honda’s Cal Crutchlow, but both will join Rossi and Brno race winner Brad Binder (KTM) in the first part of qualifying.