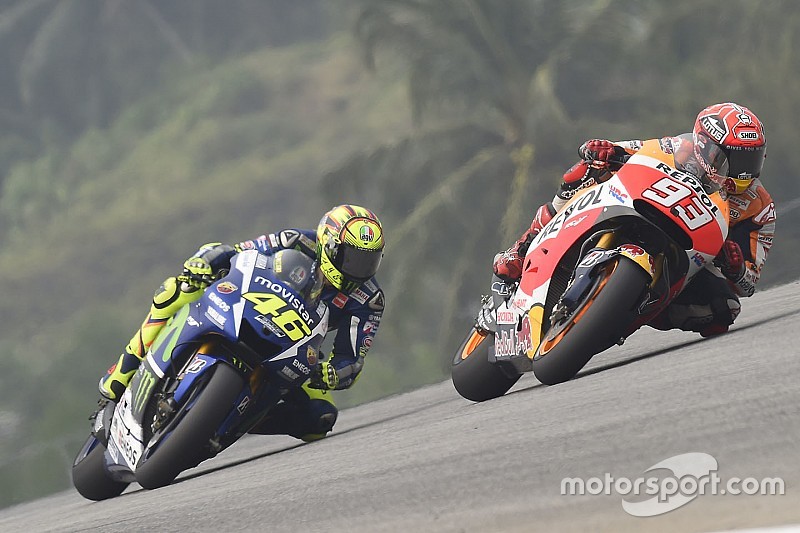 Grand Prix motorcycling legend Phil Read has accused MotoGP organisers Dorna Sports of behaving like the "Spanish mafia" in their handling of the controversy between Valentino Rossi and Marc Marquez last year.

Tensions between Rossi and Marquez famously came to a head at last year's Sepang race, where the duo made contact during their fight for position, sending Marquez tumbling.

Race stewards deemed Rossi responsible for initiating the contact, and chose to award him three penalty points - effectively sentencing him to the back of the grid for the Valencia title decider, where the Italian went on to lose the championship to Yamaha teammate Jorge Lorenzo.

And double 500cc champion Read reckons the episode was demonstrative of how Dorna in fact favours Spanish riders over their rivals.

“It was totally unfair at the Malaysian Grand Prix for Valentino to be penalised, and to have to start at the back of the grid [at Valencia]," Read said at the Autosport International Show on Sunday.

"To my mind it was Marquez’s fault, he leaned on Valentino."

“MotoGP is run by a Spanish group [Dorna], and I feel it’s getting like the Spanish mafia. They are favouring Spanish riders, and not supporting fairly the foreign [non-Spanish] riders.”

Wayne Gardner concurred with Read, saying that Marquez had only himself to blame for crashing.

“I think it was the wrong call by the race stewards to penalise Rossi to put him at the back of the grid," said the 1987 500cc champion.

"The whole situation was aggravated by Marquez trying to hold Rossi up, so he could let Lorenzo get away, and then he fell off of his own accord.

"Rossi didn’t push him off with his knee, he was pushed off because he was leaning on [Rossi].

"And then to make Rossi start from the back of the grid for the last race of the championship when he’d fought all year for it, it was a little bit unfair.”